[Watch]: Unconscious Cobra Given Oxygen, Gets New Lease of Life In Odisha’s Malkangiri 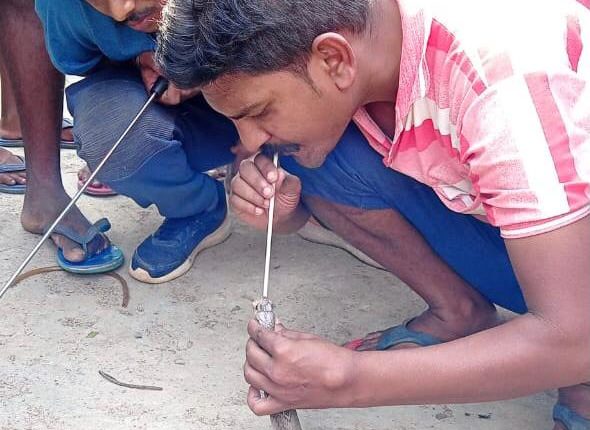 Malkangiri: Timely response by a Snake Helpline member saved the life of a cobra at Nuaguda Sahi in Odisha’s Malkangiri district.

A man spotted a snake at his home in Nuaguda Sahi and informed the helpline. Snake Helpline member Snehashis Nayak and his team reached the spot and found a four-feet Cobra on the wall of the house. They rescued the reptile but found it unconscious.

After efforts to save awaken it failed, Nayak gave oxygen in the mouth of the Cobra with the help of a pipe following which the snake started moving after some time.

The team members gave the snake some water to drink and released it in a nearby jungle. A video of this beautiful relationship between man and he reptile went viral in social media.

After seeing the viral video, people congratulated and praised the effort of Snehasis and his team.