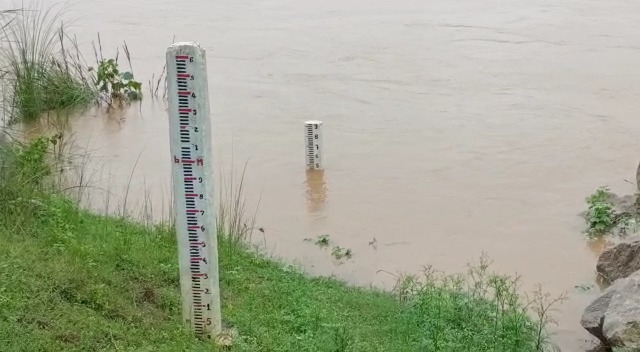 Rayagada: The flood threat in Odisha’s Rayagada district has receded as the water level of three major rivers has come down on Tuesday.

The district, which has been receiving torrential rain for the last three days, got a respite on the day with a clear sky and sunshine. With rainfall coming down since last night, the water level of Bansadhara has also fallen below warning mark.

The river was flowing above the warning mark of 83 metre at Gunupur for the last two days. According to district administration sources, the water level of Bansadhara had dropped to 82 metre. The danger mark at Gunupur is 84 metre.

The rainfall in upper catchment areas of the river like Chandrapur, Muniguda and Gudari has come since the last night. Similarly, the water level of Nagabali and Jhanjabati rivers has also dropped to a good extent.

The district witnessed landslide and collapse of mud houses at several places during the last three days. However, there was no report of casualty from any place.

During the last 24 hours, Chandrapur block received maximum rainfall of 21.3 mm. While 6.8 mm rainfall was recorded in Gudari block, it was 0.4 in Rayagda, 1.2 in Kolanara, 6.4 in Kalyansinghpur, 1.3 in Padmapur and 3 mm in Muniguda. The district received total 54.8 mm rainfall during the period.

Odisha Flood: Another District Orders For Closure Of 32 Schools