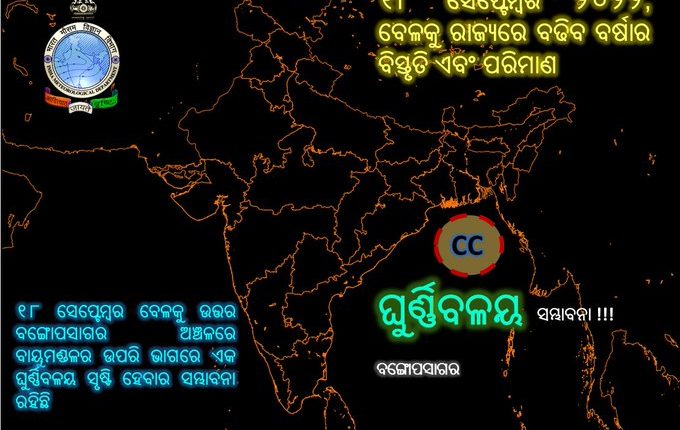 Bhubaneswar: While the depression that turned into well-marked low-pressure area is expected to further weaken within 24 hours, a fresh cyclonic circulation is likely to form over north Bay of Bengal around September 18 and trigger widespread rainfall activity in Odisha, the India Meteorological Department (IMD) informed on Monday.

The agency, however, is yet to predict further movement and intensity of the system. It, however, said that rainfall intensity in Odisha may increase from September 18 under the influence of the anticipated cyclonic circulation.

Senior Meteorologist Jason Nicholls tweeted: “Well-marked low near Madhya Pradesh will produce areas of heavier rain in Madhya Pradesh, Gujarat and Maharashtra into Uttar Pradesh over the next few days. Scattered rains in South Pakistan for the next couple of days. Another low can form in the Bay of Bengal early next week.

On September 1, the IMD in its North Indian Ocean Extended Range Outlook for Cyclogenesis said thatthere is a likelihood of formation of cyclonic circulation/low-pressure area over westcentral and adjoining northwest Bay of Bengal during week 1 (September 2 to 8) and week 2 (September 9 to 15). However, no cyclogenesis is likely over the North Indian Ocean during the period, it added.

Due to strong monsoon current squally weather with gusty surface wind speed reaching 40 to 50kmph is also likely along & off Odisha coast adjoining northwest Bay of Bengal during the next 48 hours, it added.