When It’s Election Time In Bengal, Mamata Will Be Left Alone In TMC: Amit Shah 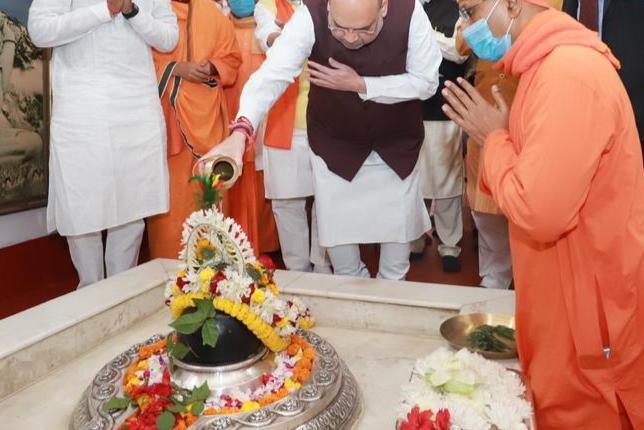 Kolkata: Amit Shah could not visit Swami Vivekananda’s ancestral home in north Kolkata last year, ahead of the general elections, due to a political slugfest between the Trinamool Congress (TMC) and BJP over vandalization of Vidyasagar’s statue. The Union Home Minister made amends on his latest visit to West Bengal, as he paid homage to Swamiji on Saturday before heading for Midnapore to attend a public rally.

Addressing a huge gathering at the Midnapore College Ground, Shah claimed that when election time arrives in West Bengal, Trinamool Congress (TMC) supremo Mamata Banerjee will be left alone as all other leaders would have defected to the saffron camp.

“The tsunami I am seeing in Bengal today, I must say that this is something that Mamata Banerjee would not have thought would happen. By the time the elections come, the entire scene in Bengal would change. There won’t be anyone left in the TMC except her own self,” Shah said, accusing her of giving preferential treatment to nephew Abhishek Banerjee, the Diamond Harbour MP.

Not for the first time, Shah appealed to the public to give BJP a chance to turn the state into ‘Sonar Bangla’. “You gave Congress and the Left 30 years, Trinamool 10 years… now give us 5 years, we’ll convert Bengal into Sonar Bangla,” he said.

Shah expressed confidence that the BJP will form the next government in West Bengal with more than 200 seats in the 294-member assembly.

Referring to the attack on BJP national president JP Nadda’s convoy on December 10, Shah said, “The more violence Mamata Banerjee led TMC government perpetrates, the stronger BJP will emerge. Didi is accusing us of poaching their leaders. I would like to ask her one question: what was her previous party? Didn’t she leave the Congress to form TMC?”

It goes without saying that the BJP is leaving no stone unturned to win over voters in West Bengal.

Man Gets Mother’s Body Exhumed After Three Months; Know Why