When Journalism Is Rabble-Rousing

Cry Not A Tear For Old School Journalism 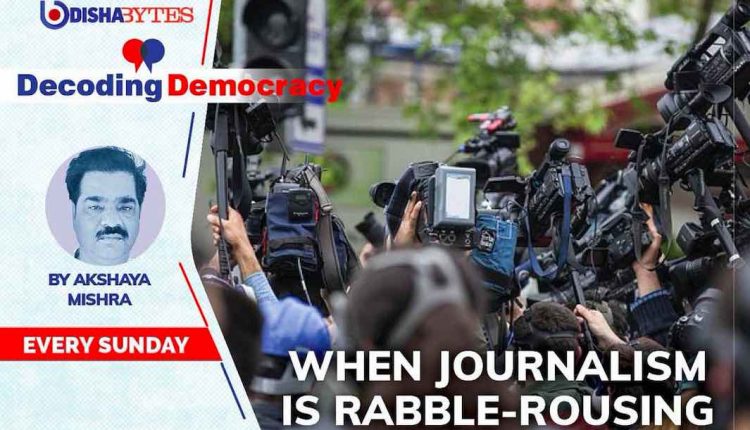 He is the man, most critics would agree, who killed journalism, single-handed, intemperate word by intemperate word, and with maniacal energy. But he can be credited with reinventing Indian journalism too; for good or bad could be a matter of debate though. A tribute to his genius is the proliferation of clones and copycats on television channels across the country. A better tribute is the raw passion he generates unfailingly in living rooms and homes of Indians across class barriers. The wannabes hardly make the grade here. While the original is some version of the fabled Pied Piper of Hamelin who can blow his pipe and lead all rats of a town into the river, the copycats just blow the pipe, loud and irritating. Old school journalists may treat him with disdain for not being a journalist at all, but he is hardly the one to expect a certificate of authenticity from peers; he legitimises his brand of journalism through popular approval, measured in television rating points (TRPs).

What makes him the success that he is? To begin with, he shifts the media’s role from bystander to influencer. Second, it is his persistence in addressing the emotions of the target audience rather than their faculties for logical thinking; and emotions matter. Third, irreverence to professional forbearance. While old-school journalism would be reluctant to overstep red lines of morality and ethics, his would cross them with no qualms. Fourth, his approach allows no space for indecision. Being a fence-sitter, in his brand of journalism, is not an option. He takes a position, and coaxes as well coerces the audience into taking one. This makes the audience active players rather than passive onlookers on any issue. Fifth, in public perception, he asks power questions the way a journalist should: rough and uncompromising. Sixth, he tears down the veneer of respectability, the hideout of hypocrisies, on the high and mighty the way the commoner with a grouse would love to.

We could go on, but to sum up, he exposes and capitalises on several inadequacies in old-school journalism, the most important among them being the loss of connect with people. Our ongoing series, as we have mentioned earlier, seeks to understand the alienation of the masses from the institutions of democracy in recent times and the reason behind the emergence of reactionary, combustible, and at times toxic yet popular ideas in all spheres. Like politics, the justice system and elsewhere, journalism, too, is supposed to serve a purpose; when it does not, it has to make way for the new. Arnab represents the new, which may often be utterly dislikeable but has to be acknowledged for the simple fact that it exists and cannot be wished away.

Before someone concludes this is a generous view of the brand of journalism Arnab pioneers, one must make clear that there’s much that is wrong with it. It’s manipulative, propagandist, provocative, unreasonable and designed to cater to crude sentiments rather than the thinking capacity of individuals. It infantilises the audience, turns the serious business of informing people into low entertainment, and has little sense of balance. It not only underplays bread and butter issues but also aims at distracting people from them. Of course, it cannot survive without assured political backing or serving a political agenda. Those familiar with Adolf Hitler’s exposition of propaganda as a tool to influence the masses would discover curious similarities in how the modus operandi of both are in agreement.

However, that said, this brand of journalism is unapologetic about the way it is. It can afford to be. Democracy has shifted from being the exclusive preserve of the gangs of the elite and the prisoner of their worldview. It has gone to the masses like politics has. If the earlier school of journalism appeared to be on the side of the elite, echoing their points of view and largely indifferent to public sentiment on issues, the new one has no such pretension. It could be accused of pursuing an agenda, but the fact is the agenda too has its roots in the disenchantment of people with the old order. It has not grown in a vacuum. If majoritarian tendencies are on the ascendant and have found convergence points in Hindutva, nationalism, and a homogenising view of the world around, the question that begs an answer is, did journalism earlier drive people to it? Be it communal riots or terrorist attacks or the matter of the Ram temple, did it convince people that it was being non-partisan and trustworthy? Introspection is in order here. When their truth is largely treated as hogwash, then it surely is a matter of lost credibility.

The new brand of journalism does not inspire confidence. Perhaps, as the accusation goes, it is not journalism at all. It weaponises the innocence and ignorance of people to give shape to political designs. It reduces the audience to herds of obliging, pliable followers. But it reinforces the fact that people and their emotions matter in all spheres. Here credit goes to Arnab Goswami.