Who Said What During Campaigning In Odisha; Find Out 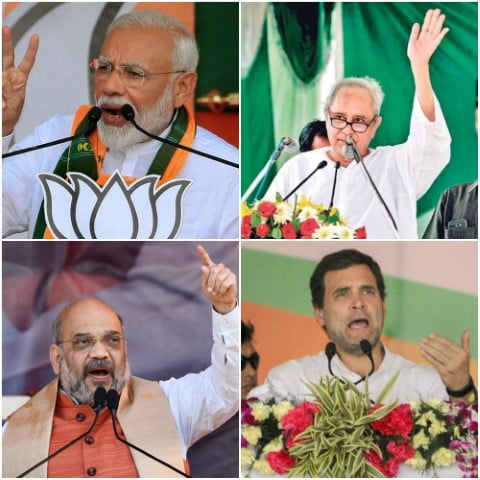 Bhubaneswar: Campaigning for the 2019 polls has come to an end. The vicious personal attacks, personalised jibes and taunts against political opponents made this election one of the most fiercely-contested ones in recent times. The campaign pitch in Odisha was no different either with leaders from across political parties levelling serious charges against rivals.

With barely 96 hours remaining before Odisha and the rest of the country gets to know who will rule us for the next five years, let’s take a look at who said what during their campaigns in Odisha.

1. Narendra Modi in Balasore:
Until now I had held myself back from criticising Naveen Patnaik. Naveen babu has been a four-time chief minister and I wanted a dignified farewell for him. But violent activities during polls much like in Bengal in the last 10-12 days has riled the voters. A handful of officers have turned a blind eye to it. People of the state have decided to unseat this government. I want to say, ‘Naveen babu, aap jaa rahe ho, apka jaana tay hai“.

2. Naveen Patnaik in Balasore:
Yesterday, the Prime Minister had said he would visit Odisha again after the BJD government is unseated. As the BJD, with the blessings of the people of the state has already wrested absolute majority in the third-phase polls, it is my humble request to Modi Ji to grace the swearing-in ceremony of the BJD government as a distinguished guest.

3. Rahul Gandi in Baragarh:
“Chowkidaar (Modi) chor hai Naveen Patnaik remote control hai. Naveen acts according to the directions of the Modi. If the GST or any other legislation needs to be passed in Parliament, Modi will press the button in Delhi and Naveen will get them passed”.

4. Naveen Patnaik:
“Bilkul Bakwaas,” the Chief Minister said laughing when mediapersons asked him if there was any truth in Rahul’s statement that he was remote-controlled by Prime Minister Narendra Modi.

5. Amit Shah in Ganjam:
“When Naveen babu is unable to speak a single line in Odia, how can he ensure the welfare of the people and address large-scale migration from Odisha”.

6. Rahul in Kalahandi:
“I do not make false promises of depositing Rs 15 lakh into your bank accounts or generating two crore jobs every year, but I assure farmers that out government, if voted to power in Odisha, will build cold storages across the state, provide minimum assured price of Rs 2,500 to farmers, give back land to displaced people and waive off farm loans,” he said.

7. Naveen Patnaik in Mayurbhanj:
“So far, nearly 40 lakh farmers have benefited because of the KALIA scheme. But the Centre is trying to stop this scheme. As long as I am there, no one can stop this scheme,”

8. AAP president Arvind Kejriwal in Bhubaneswar:
“The BJD, BJP and the Congress government are working in tandem here and looting the state. They decide among themselves who will win which seats during elections,” Kejriwal alleged, asking people to vote for AAP in Odisha for a “better and transparent administration”.

9. Naveen Patnaik at Daspalla:
“Is the saffron party afraid to announce its CM candidate?”.

10. Narendra Modi in Bhawanipatna:
Recalling former Prime Minister Rajiv Gandhi’s famous speech in Kalahandi, where he had said that only 15 paise of Re 1 reaches the poor, Modi hit out at the Congress saying “why did the party fail to cure it despite being aware of the ills?”