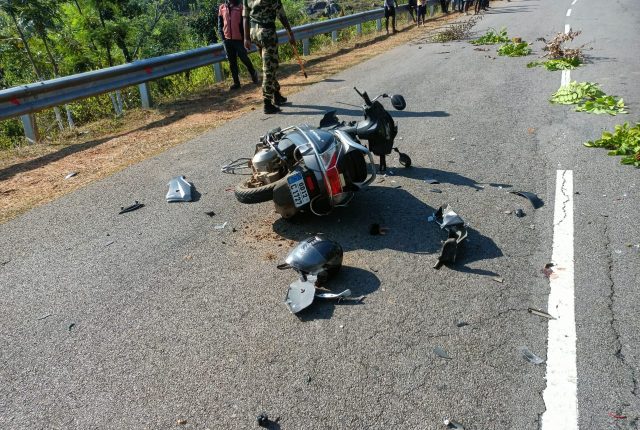 Phulbani: A woman teacher and a clerk were killed after the scooter they were riding was hit by a speeding motorcycle near Lingagarh in Odisha’s Kandhamal district on Saturday.

According to sorurces, the two women were on their way to the school on a scooter when the speeding bike carrying two minor boys collided head-on with their two-wheeler.

All the four were taken to the local government hospital by an auto-rickshaw where doctors declared both women dead. The minor boys survived the crash with injuries and are undergoing treatment.

The deceased women were identified as Pradipta Sahu (34), a teacher of Lingagar Kanyashram School and a resident of Nayagarh, while the other woman was Bimala Pradhan (47) of Kupaguda village in Malikapadi panchayat. Family members and villagers reached the hospital after getting the information.

Inspector In-Charge of G Udayagiri police station, Ajay Swain also reached the hospital to take stock of the situation. He said the minor boys, who were riding the bike, are undergoing treatment while both the damaged vehicles have been seized.

Recalling 1998 Heatwave That Killed 1,300 In Odisha: Here’s What Will Happen If Global Warming Breaches 1.5-Degree Mark