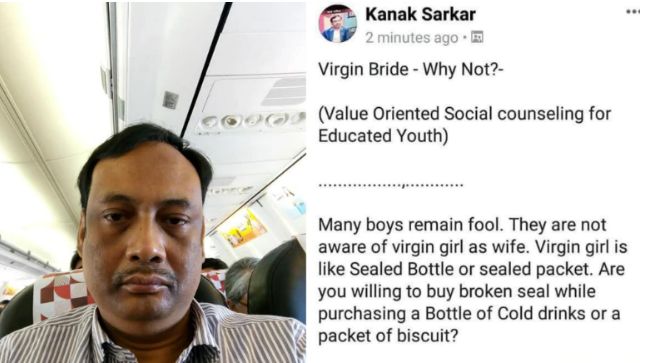 Kolkata: Professor Kanak Sarkar of Jadavpur University has finally been shown the door. Cracking the whip against his controversial remark about women’s virginity that triggered nation-wide outrage, the varsity on Wednesday divested him of his teaching duties with immediate effect.

The move followed a recommendation of the student-teacher committee of the department of international relations where Sarkar was teaching. 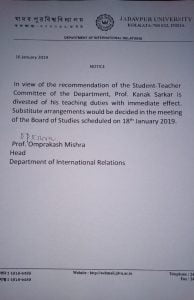 Prof Sarkar had attracted widespread condemnation after he posted a message in his facebook account, likening a woman’s virginity to a “sealed bottle” or “packet”.

“Are you willing to buy a broken seal while purchasing a bottle of cold drink or a packet of biscuits? A girl is born sealed from birth until it is opened. A virgin girl means many things accompanied with values, culture, and sexual hygiene. To most boys virgin wife is like angel.”

Sarkar had earlier been accused of sexual harassment by some of his students and his name also appeared in one of the Facebook posts around 2017 when the #MeToo movement gathered momentum.

He, however, remained unperturbed, maintaining that he had made the comments out of “fun” among followers of social media and it was not intended for “public consumption”. He had even invoked the constitution guaranteeing freedom of speech and expression.

Quint reported some of his students who were subjected to harassment by him.

“When I was in my first year, I had to go to Kanak Sarkar’s official room to submit a presentation. He had asked me whether I’d like to bathe with him in any river. That time, I was small (young) and I didn’t understand that it counts as harassment. But now, after experiencing all these things for all these years, we have been able to take the decision that we are finally boycotting his classes.”

“He [Sarkar] talks about a lot of irrelevant things in class which proceeds to normalising sexism, indulges in misogyny. He talks to his female students about the way they dress and if they are wearing short clothes, he will check them out.”

According to the post shared by journalist Adrija Chatterjee, the professor once told a female student she is “what men would enjoy”.

The professor, who teaches international relations at the university, had asked a female student if she wants to be a model as her figure is model like and if she has a lot of male friends. “Because according to him, I’m what men would enjoy,” the woman alleged.