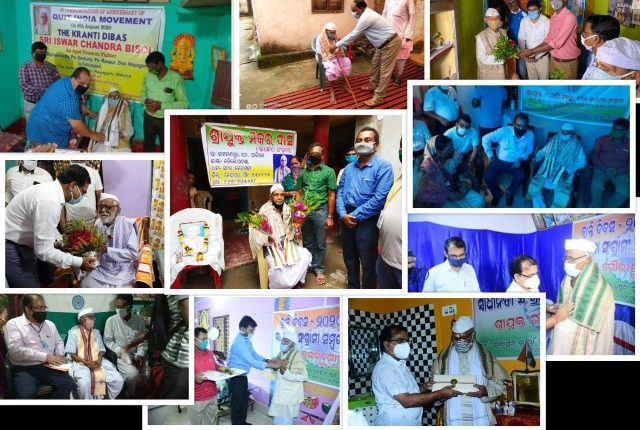 Bhubaneswar: Ten freedom fighters of Odisha, who draw pension under Swatantrata Sainik Samman Yojana, were conferred with the President’s Award for their contribution to India’s independence movement.

Due to the COVID-19 guidelines amid the pandemic, the district magistrates visited the awardees’ residence and presented them this year’s award, on behalf of the President of India.

Ten revered Freedom Fighters of Odisha drawing pension under Swatantrata Sainik Samman Yojana been felicitated by the District Administration on 9 August, 2020 by presenting shawls & Angavastram on behalf of the Hon’ble President of India.#SalutingFreedomFighter@rashtrapatibhvn

The prestigious award is presented by the President of India at a glittering ceremony in Presidential Estate in Raisina Hill, New Delhi, every year on Quit India Day on August 9, which is also celebrated as August Kranti Diwas. An exception had to be made this year due to the coronavirus pandemic.

A Central scheme for grant of pension to freedom fighters and their eligible dependents (in case freedom fighters have expired) was introduced by the Government of India with effect from August 15, 1972. In 1980, the scheme was liberalized and renamed as Swatantrata Sainik Samman Pension Scheme.