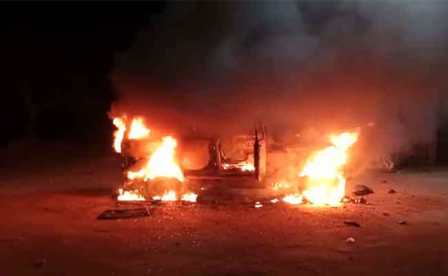 Jajpur: The Jajpur Sadar Police on Saturday evening detained 13 persons from Panasudha village under Bharatpur panchayat for setting a police jeep and a van on fire.

According to sources, there was a dispute between two groups of the village over the venue for the Astaprahani Yagna for the last four years. Anticipating violence, one platoon of the police force was already deployed in the village.

Despite the presence of cops, one group went on a procession from Katikata Chhak to the venue and decided to hold the Astaprahari Yagna. The other group stopped them midway that created a tension in the area.

A team of policemen from Balichandrapur police station arrived at the village. Seeing the police, one group attacked them and set a police jeep and a van on fire.

The Sadar SDPO rushed to the village with one platoon of force and sealed the village from all sides.

Police later picked up 13 people and detained them at the Balichandrapur police station for interrogation.

Ex-Husband Held For Murder Of Lady School Teacher In Jajpur

Delivery In Times Of COVID-19: Woman Gives Birth Inside…