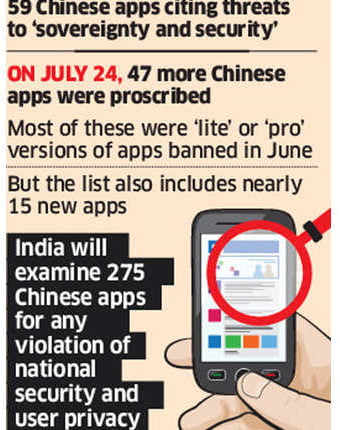 According to an Economic Times report, among the new apps included in the list are photo editor AirBrush, short video and prediction tool Meipai and camera app BoXxCAM, which are owned by China’s Meitu, that makes smartphones as well as many popular selfie apps. The company’s flagship app Meitu was banned in the first round.

The remaining were ‘lite’ or ‘pro’ versions of the apps that the government banned earlier in June this year, including TikTok and Helo, both owned by ByteDance.

Email service NetEase, gaming app Heroes War and SlidePlus by QuVideo Inc are the other new apps that were in ‘block’ list issued about 10 days ago. Xiaomi’s Mi Browser Pro has also been blocked after its Mi Community app was banned earlier.

Similarly, Baidu Search and Search Lite have been included in the fresh list. Earlier, the Nasdaq-listed Chinese technology giant’s Translate and Maps had been proscribed.

The government continues to monitor the situation, a senior official said. “We will take a call on further action if any of the apps try to come back with different names,” the official said, requesting not to be named.

“Xiaomi continues to comply and adhere to all data privacy and security requirements under the Indian law. We… will take appropriate measures as required. As part of the process, we will work with key stakeholders for an opportunity to make our submissions,” a Xiaomi spokesperson said.

“Most of the apps have a high user concentration, of several million daily active users in India. So, while the apps may not be revenue-positive in India, from the user point, India is a significant market,” said Akash Karmakar, a fintech and privacy specialist.

Companies have submitted their response to the government questionnaire and are now waiting for due process to be followed. Executives are also concerned that more apps from their stable will be blocked in future.