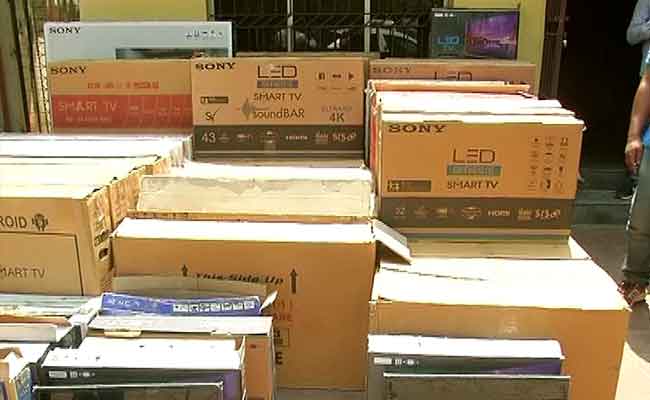 Bhubaneswar: The special squad of the Commissionerate Police here on Tuesday seized 150 duplicate TV sets from different areas of the city and arrested four persons.

Briefing the media, Bhubaneswar DCP Umashankar Dash said that the racket run from neighbouring West Bengal in which duplicate TV sets were manufactured and sold here by using the logo of branded companies.

“The interrogation of the accused revealed that they used to transport the duplicate TVs from West Bengal to Odisha through sea routes. After unloading at the Paradip Port, they would bring them to Bhubaneswar and sell them in the slums and to the people who want cheap but branded TV sets. They used to sell these duplicate TV sets half the price of the original by convincing the people that these are procured directly from Paradip Port and no GST is charged on them,” the DCP said.

Police also got the seized TV sets checked by engineers of some branded companies and they found that these were duplicate after examining the components, he added.

“The interrogation of the accused is underway to ascertain the details about their stint in this illegal business and the number of duplicate TV sets they have sold so far,” he pointed out.