18,414 Gana Sikshaks to be regularised soon 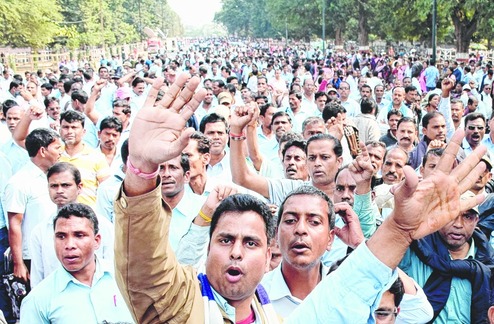 Bhubaneswar: The school and mass education department on Sunday announced to regularise around 18,414 trained and eligible Gana Sikshaks in the state.
Official sources said the director of elementary education had forwarded the list comprising the names of eligible Gana Sikshaks to the department, which then asked the district project co-coordinators to put it up on the notice board of the offices concerned by August 24.
“Any objection regarding the same will be received by September 22. These will then be scrutinized by the district project coordinators. The decision will be taken as per the department’s resolution dated on July 25, 2016, and the notification dated on December 22, 2016,” a government notification stated.
A total of 1,619 Gana Sikhaks will be regularized in Mayurbhanj district, 1,502 in Sundargarh, 1,309 in Kalahandi, 1,238 in Balasore, 737 in Nabarangpur, 736 in Balangir, 680 in Rayagada, 657 in Sambalpur, 634 in Bargarh, 633 in Koraput, 623 in Bhadrak, 609 in Nuapada and 605 in Ganjam, the sources added.

Heavy rain to lash 9 districts in next 48 hours