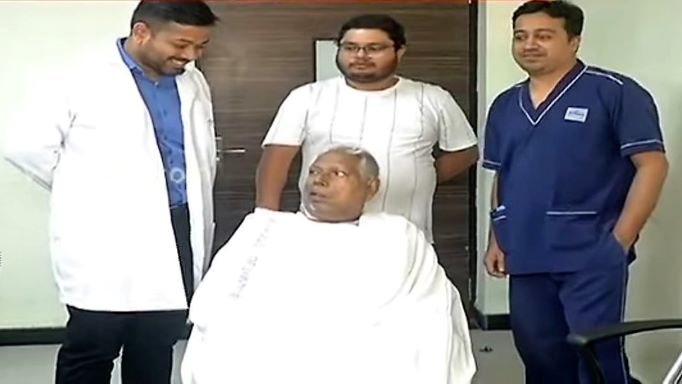 Bhubaneswar: In a first of its kind in Odisha, doctors in SUM Ultimate Medicare (SUMUM) in Bhubaneswar successfully treated a patient’s bleeding through urinary tract by super selective angio-embolisation of the prostatic
artery.

Dr Priyabrat Das, Consultant, Urology, along with interventional radiologist Dr Sambit Pattnaik and Dr Jitendra Kumar Barad, performed the complicated procedure. The procedure, in which the prostatic artery was blocked bilaterally, was performed for the first time in Odisha, Dr Das said.

“The patient suffered from advanced carcinoma prostate that had led to recurrent hematuria. To stop the bleeding, we had to block the prostatic artery bilaterally by a procedure called super selective angio-embolisation.” Dr Das said.

Earlier, these types of cases were treated through a major surgical procedure that carried the risk of affecting various organs. However, through super selective angio-embolisation, blood flow only to the prostate is stopped,
he added.

Dr Pattnaik said the super selective targeted treatment was the latest procedure being followed and it also had several advantages over traditional surgery.

“We reached the prostatic artery through the femoral artery by making a small incision in the left groin. After this, embolisation was done in the prostatic artery with PVA particles,” Dr Pattnaik said adding that this is a minimal invasive procedure which results in quick recovery of the patient.

“The procedure ensures that there is very less chance of post procedural complications. It is cost effective from the patient’s perspective and convenient for patients with co-morbidities,” he said.

Odisha Govt, FICCI To Work Together For Success of International Year of Millets