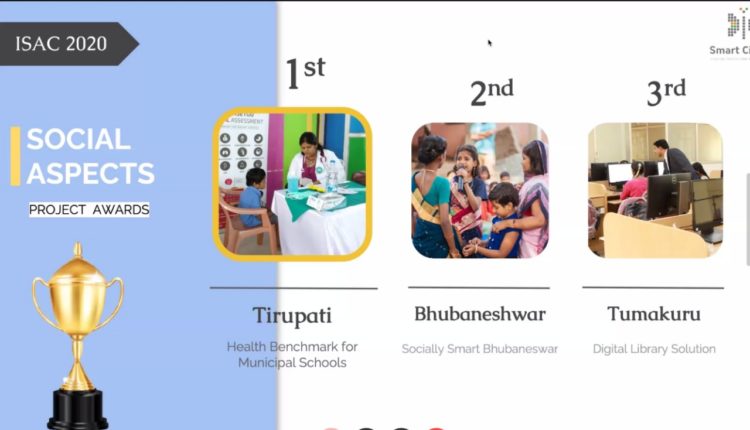 Commonly called IASC-2020, the winners were chosen from as many as 100 Smart Cities. The awards were declared this afternoon by MoHUA in New Delhi.

Bhubaneswar continued its eminence as a leading Smart City in the country as the Temple City was recognized for two major BSCL projects — Socially Smart Bhubaneswar and city’s unified citizen service portal Bhubaneswar.Me — in Social Aspects and Governance categories.

Tirupati and Tumakuru were rated first and third respectively in Special Projects category, while Vadodora and Thane were adjudged first and second, respectively, under Governance category.

“We have achieved these awards with our innovations and ideas, and in future the city will come up with more such citizen-centric projects. The Smart City Project works will be expedited and I hope in future we will win more such awards during Smart City Challenge,” said BSCL CEO Sanjay Kumar Singh.

‘People-centric programme for making Bhubaneswar a socially smart city’ is a joint collaborative initiative of BSCL and UNFPA, which takes cognizance of the needs of young people in the context of prosperity, safety equity and sustenance.

It aims to transform Bhubaneswar through improved infrastructure, technology, economic drive and quality of life for people and will contribute to achieving the SDG 11 (Sustainable cities and communities).

Bhubaneswar.me is part of city’s governance, with the city administration wanting to bring transparency through the initiative.

Imam Castrated, Beaten To Death By Wife; What Was The Provocation?