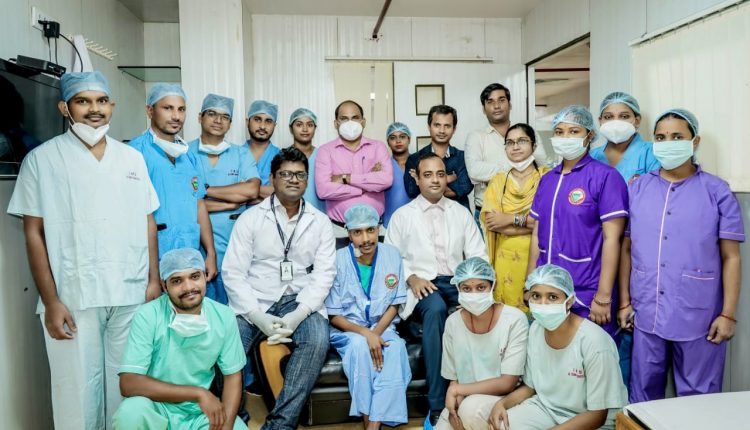 Bhubaneswar: A 25-year-old youth, who was suffering from a congenital life-threatening cardiac ailment, got a fresh lease of life thanks to surgeons at Institute of Medical Sciences and SUM Hospital, faculty of medicine of Siksha ‘O’ Anusandhan (SOA), successfully performing a rare surgery.

Sarada Prasanna Patra, who had difficulty in breathing and was unable to do any work, was admitted to the hospital here for examination. Thorough scrutiny revealed a large hole on the wall separating the two ventricles of the heart, a condition known as ventricular septal defect. The pulmonary artery was also completely blocked.

“Because of the hole the purified blood was getting mixed with the unpurified and his oxygen saturation level was about 70 per cent. His artery size was also very less,” explained Dr Sangram Keshari Behera, Senior Consultant in the department of C TVS.

Known as Tetralogy of Fallot (TOF) in medical parlance, this is a congenital defect, Dr Behera informed.

Since the pulmonary artery was blocked, several pulmonary collaterals, a network of tiny blood vessels, had formed on their own to help blood circulation, he added.

Patra was treated by Consultant Cardiologist Dr Dibya Ranjan Behera, who conducted coil embolisation to prepare him for the surgery in Cath Lab. Cardiac anesthesist Dr Susanta Kumar Bhoi performed a major role in the surgery.

Dr Sangram Behera informed that the patient was put on heart-lung machine before the surgery was performed. He closed the ventricular septal defect, enlarged the right ventricular outflow tract with a transannular patch and implanted a pulmonary valve.

The patient recovered well post surgery, and was discharged on Tuesday.

This is not the first time that a complex surgery has been performed at SUM hospital.