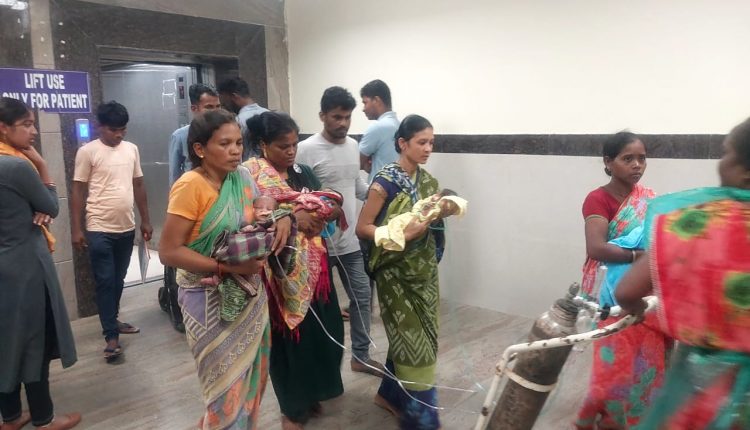 Berhampur: MKCG Medical College and Hospital at Odisha’s Berhampur city has landed in controversy as a video on three children being put on oxygen supply from one cylinder went viral on Saturday.

According to sources, the three children were admitted with ailments in the special newborn care unit (SNCU) of the hospital. On checking the children, the doctors advised to shift them to Cardiology department as they had cardiac problem. As they were having breathing problem, the children were put one oxygen mask.

While they were being carried by their mothers to Cardiology department, the video shows each of the three children being given oxygen through separate plastic pipes connected to one cylinder. An attendant of the SNCU is shown pulling the cart containing the cylinder all the way to the Cardiology department crossing a distance of nearly 400 metre and the mothers walking in tandem with her.

Ironically, when the children arrived at the Cardiology department, the doctors faced difficulty in sending them separately for echo test and expressed their resentment at the mothers for the awkward arrangement.

When contacted, hospital superintendent Prof Santosh Kumar Mishra said the condition of all children was stable. Since the children’s oxygen need is minimal, it is normal to connect more than one child to a single oxygen cylinder, he added.

ISL: Own Goal Hurts As Odisha FC Go Down To Mumbai City FC

‘Living In State Of Fear, Help Us’: 180 Hindu Groups In UK Write To PM Liz Truss