3 Panchayats Cut Off From World In Odisha’s Khurda Dist 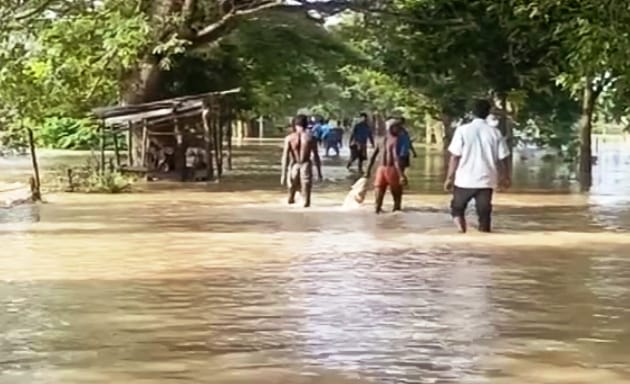 Khurda: Three panchayats in Odisha’s Khurda district have been rendered waterlogged after release of excess water from Hirakud dam in Sambalpur district.

Around 15 villages in Orbarsing, Narayangarh and Brajamohanpur panchayats have been inundated. With floodwater flowing 4-5 ft on the main roads connecting to the panchayats, the villages have been cut off from outside world for the last two days.

Speaking to media persons, sarpanch Sanjay Kumar Raisingh said after 34 sluice gates of Hirakud dam were opened, the floodwater reached the low-lying areas of the district two days back. The main road connecting to three panchayats has been submerged with 4-5 ft water flowing over it, he added.

Stating that the road communication to these villages has been completely stopped, he said most of the people have shifted to higher places. Those remaining in their houses were coming out in case of emergency. A country boat has been pressed into service to help the people needing medical attention, he added.

“The government officials including BDO visited the area and on his instruction, we are preparing cooked food to be distributed among the flood-affected families in the area. But drinking water remains the main problem as defunct borewells in the villages have not been repaired,” the sarpanch said.