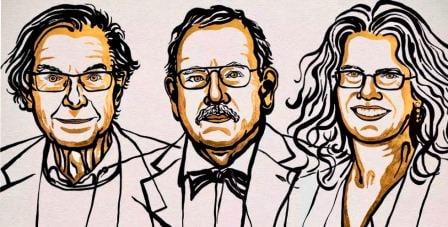 Stockholm: Three scientists — Briton Roger Penrose, German Reinhard Genzel and American Andrea Ghez — won the Nobel Prize in physics this year, which was announced on Tuesday. They received the honour for advancing understanding of black holes, the all-consuming monsters that lurk in the darkest parts of the universe.

Penrose received half of this year’s prize “for the discovery that black hole formation is a robust prediction of the general theory of relativity,” the Royal Swedish Academy of Sciences said.

Genzel and Ghez received the second half of the prize “for the discovery of a supermassive compact object at the center of our galaxy,” the secretary-general of the academy, Goran K Hansson said.

The honour celebrates “one of the most exotic objects in the universe,” black holes, which have become a staple of science fact and science fiction and where time even seems to stand still, Nobel committee scientists said.

Penrose discovered with mathematics that the formation of black holes was possible, which was based heavily on Albert Einstein’s general theory of relativity.

“Einstein did not himself believe that black holes really exist, these super-heavyweight monsters that capture everything that enters them,” it said. “Nothing can escape, not even light.”