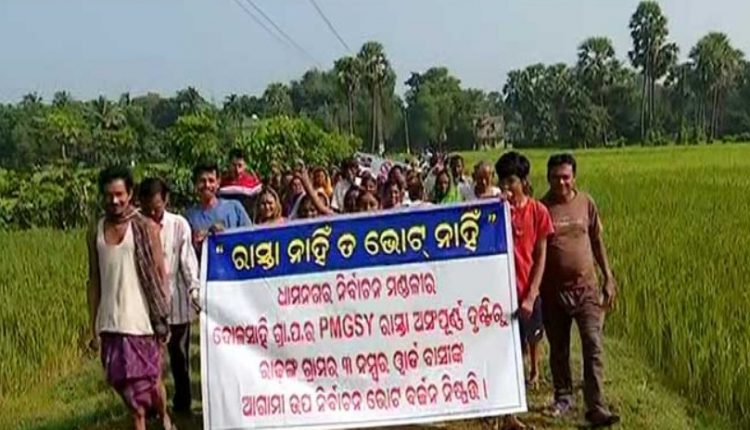 Bhadrak: Three villages under Dhamnagar Assembly constituency in Odisha’s Bhadrak district have decided to boycott the byelection to the seat in protest against lack of road connectivity their area.

The voters of Gazipur, Radhang and Serapur villages under Dolasahi panchayat of Tihid block have started a demonstration in front of a poster announcing their decision of boycotting the bypoll to Dhamnagar in protest.

The villagers said the construction of a 400-metre road from main road of Radhang going through Ward 3 to Goramatu was started in 2000. The stretch was dug up for laying the road. But the construction work was stopped as two villagers opposed it on the ground that they would have to lose their agriculture land.

The villagers of the three villages took up the matter with Tihidi and Bhadrak tehsildars and demanded a solution to the problem. Considering their demand, measurement and layout of the road was again conducted in 2021. But, there has been no progress since then, they alleged.

Stating that hundreds of people use the stretch to go to the main road for procuring their essential needs, they said they have to face difficulties to cross it. As it has been dug up, the stretch becomes unusable by vehicle users as it turns muddy during rain.

They further said due to incomplete work, the uneven surface of the stretch, which is full of ditches and humps, has led to frequent accidents. In case if medical emergency, ambulance cannot cross the patch, they added.

In order to draw the attention of the authorities, they have decided to boycott the byelection and demanded written assurance by the authorities for their participation in it.