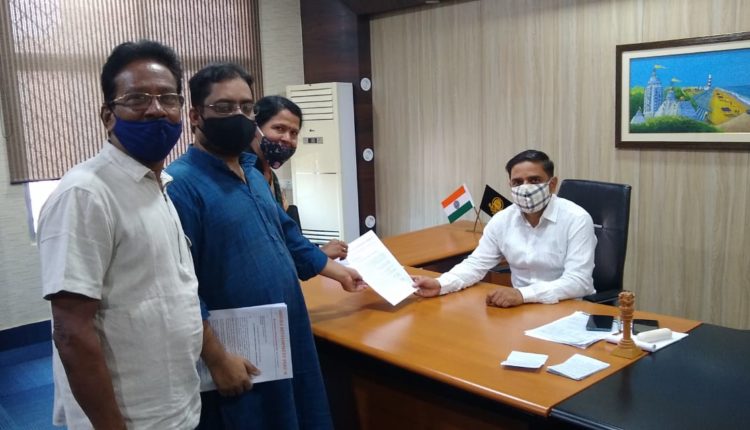 Berhampur: Members of a host of organisations took out a bike rally covering 30 km  and submitted a memorandum to Ganjam collector Vijay Amrit Kulange at Chhatrapur demanding a domestic airport at Berhampur.

An airport in the city has been a long standing demand of the local people in view of the growing air traffic and need of the people in the southern region. They have been supported by the Forum for Ganjam (FFG), Odisha Development Forum, Ganjam Chamber of Commerce, Ganjam Bikash Manch, Keshariya Bahini, Pragatishila Utkal Samaj, Ganjam Bar Association, Bahumukhi Samaj Mangal O Sanskrutika Kendra, students of NIST and other colleges and others who supported the rally on the day.

Their joint memorandum is addressed to chief secretary, secretaries 5-T, Industry and Transport. “We discussed the issue with the collector who expressed a positive response,” said Ravi Kumar of Forum for Ganjam.

The historic Berhampur Airstrip at Rangeilunda is located adjacent to Berhampur University. The Rangeilunda air base was built by the Britishers during the Second World War period and has remained an air strip since then.

When V Kartikeya Pandian was the collector of Ganjam, he inaugurated a non-scheduled air charter service from Gopalpur to Bhubaneswar on April 12, 2011. Global Avianautics (GAL), which runs the Government Aviation Training Institute (GATI) for the state government in Bhubaneswar, was operating the service. The flight was scheduled to take off daily from Gopalpur’s Rangeilunda air strip for Bhubaneswar.

The six-seater twin engine mini plane Pipper Seneca was prepared to carry four passengers and two crew members. However, the service was grounded.

The demand for a domestic airport at Berhampur has been raised at various points of time but nothing concrete has happened as yet, Ravi Kumar said.

He further said this is regrettable as Berhampur city caters to a vast population of South Orissa and is a major educational, healthcare and commercial hub of the state. Moreover, the region has a great tourist potential with spots like Gopalpur on sea, Chilika Lake, Tampara Bay, Taratarini Hill Shrine, Taptapani hot-stream and rich tribal culture. Besides, Berhampur has become the commercial hub of Odisha with the Gopalpur Port, Tata Industrial Park and SEZ, Titanium SEZ, IREL and others located in the area, he added.

A Protest That Stretches 24 Km In Odisha; Know Protestors and Cause