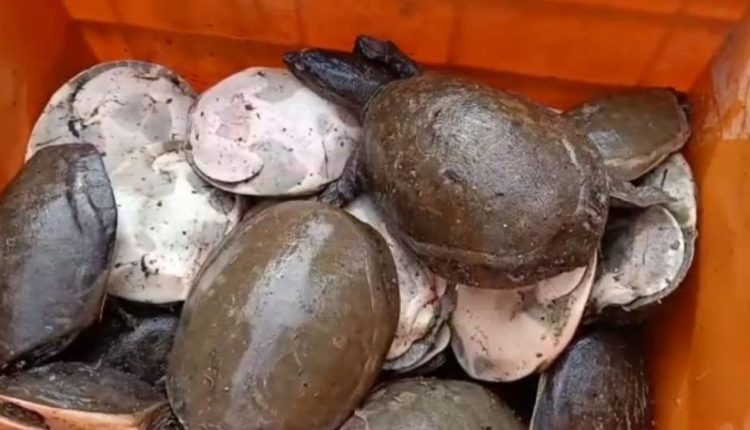 Malkangiri: Over 350 turtles were rescued by forest officials during a raid at a village in Kalimela area of Odisha’s Malkangiri district on Wednesday, sources said.

Acting on a tip-off, a team of forest officials carried out a raid at MV 65 village under Tigal panchayat in Kalimela block early in the morning and recovered the animals kept in sacks near a house, they said

The accused, however, escaped from the site and efforts are on to track him down, they said, adding that 20 sacks full of turtles were recovered during the raid by the team, led by Kalimela Forest Range Officer Sushant Kumar Dalei.

The bags were taken to the Kalimela range office by the forest department officials who made arrangements for releasing the animals in a water body.

Survival of the turtles in the wild has come under severe threat and their population is fast dwindling due to consumption and illegal trade. Many turtle smugglers are in Odisha and Andhra Pradesh for the last few years.

Smuggling of turtles, a Class I species of the water animal, is a non-bailable offence under the Wildlife Protection Act, 1972, officials said adding that turtles are used for meat, medicines and other purposes.

Students Locked Up Over Fee Payment: Showcause Notice To Pvt School In Bhubaneswar