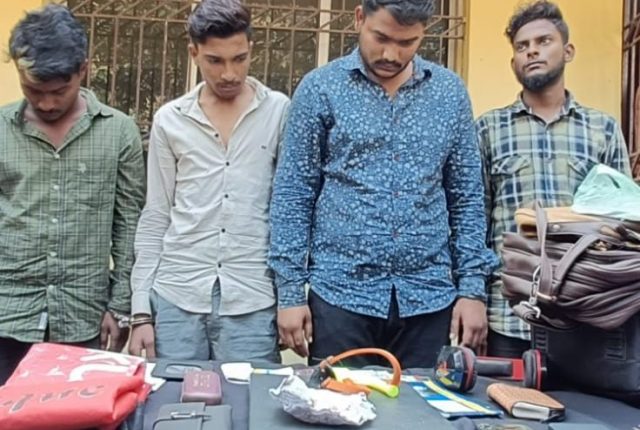 They have been identified as Surya Mudaliar, Rahul Rao, Aditya Kainri, Shankar Swami. All of them are residents of Hooghly area in West Bengal and have links in Tirchy district. At least Rs 52,000 in cash, a vanity bag, a vehicle, a glass-breaking weapon, a mobile, and a laptop were seized from their possession.

Bhubaneswar DCP Prateek Singh said that the gang was active during Durga Puja. “They would often visit the state and loot laptops, cash, and other valuables kept inside cars by breaking the window in markets. It is an interstate gang from Bengal and they committed crimes in Bihar, Assam, Karnataka, Andhra Pradesh, Jharkhand and Tamil Nadu. They also looted people by misguiding them,” he said.

The DCP said that they used to stay in a lodge during the theft and flee the area after committing the crime. “It was a challenging case since they constantly changed locations. They had managed to flee during previous raids. We were again tipped off about the gang plotting a crime and accordingly, a special squad conducted a raid and apprehended them,” he said.

“A police team will visit West Bengal to apprehend other members of this gang and to seize other stolen items. We will also contact our counterparts in other states,” the DCP added.

BJD Will Win In 2024 Elections And Naveen Will Again Be CM: Damodar Rout