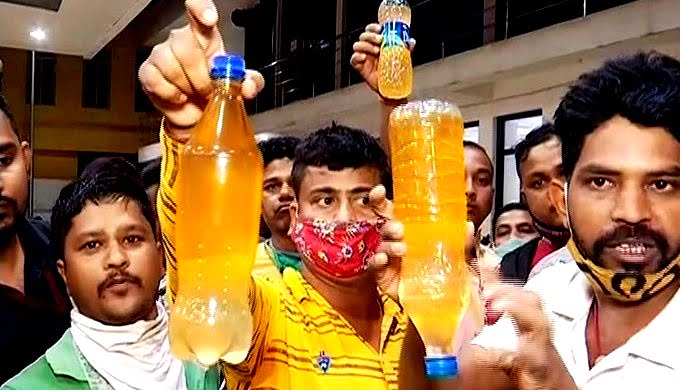 Bhubaneswar: Tension ran high at a filling station in the Odisha capital on Wednesday night after several customers heckled the owner and the staff for selling adulterated petrol.

Showing samples of adulterated petrol in plastic bottles to the media, Gobinda Saran, an employee of e-commerce company Amazon, said he used to fill fuel at the Highway Service Centre filling station of the Hindustan Petroleum Corporation Ltd (HPCL) near the Fire Station at Baramunda every day.

“My bike suddenly stopped barely 200 metres from the filling station today. Later, I drained out the petrol in a plastic bottle and found that it had about 40 per cent water,” he added.

Several customers also narrated the same plight. Complaining about damage to the engines of their vehicles after using petrol from the fuel station, they demanded stern action against the filling station owner and cancellation of his licence.

Following information, Khandagiri police rushed to the filling station and detained the owner for questioning