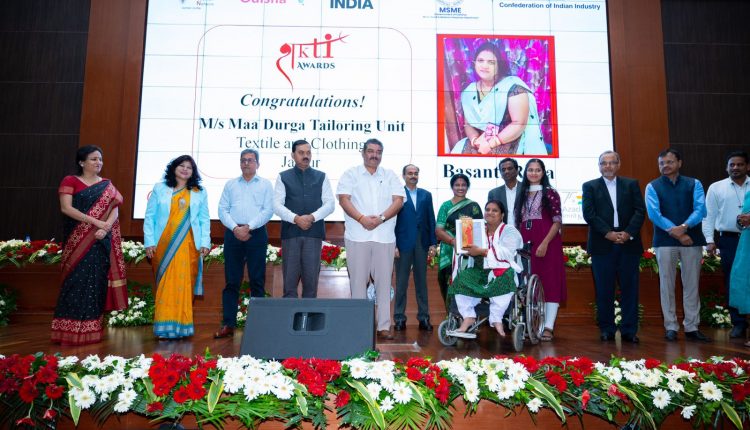 Bhubaneswar: Minister of Industries and MSME Pratap Keshari Deb conferred ‘Shakti Awards’ on 50 women entrepreneurs and micro-entrepreneurs of Odisha at a programme on Thursday.

The programme, ‘Shakti Ru Samrudhhi’, was organised by the Confederation of Indian Industry (CII)’s Indian Women Network (IWN) in partnership with MSME Department, Startup Odisha, and Mission Shakti at the Convention Centre of Lokseva Bhavan. Aimed at empowering female leadership for economic growth, the award was titled AM/NS Shakti Award this year.

Appreciating the programme for recognising the state’s women entrepreneurs, the minister said the woman achievers are no less than any other and cited the vision of Odisha’s great leader Biju Patnaik on upliftment of rural infrastructure and empowerment of women as key tenets of good governance.

He asserted this as the fundamental guiding principle of the present government under the leadership of Chief Minister Naveen Patnaik. Odisha has still many fields to be explored, resources to be harnessed and ample scope for investments to support multiple sectors of industry and economy, he added.

Principal Secretary, Industries Hemant Sharma highlighted several measures taken by the state government and called for strengthening the ecosystem for women entrepreneurs including special schemes for subsidy in the land.

Jayashree Mohanty, Chairperson of CII IWN Odisha and President of Luminous Infoways, a Member of Startup Taskforce said an eminent panel of jury members selected the awardees of ‘Shakti Awards’ through an elaborate screening process at OHUB and online personal interviews.

The co-chair of CII-IWN Priti Agrawalla presented the vote of thanks. I-Shakti, a business incubation, was launched in collaboration with AIC Nalanda on the occasion.

The CII launched the IWN with the vision of becoming the largest network for women in the industry. It works towards enabling women to become better professionals and achievers in their respective fields through initiatives and activities.