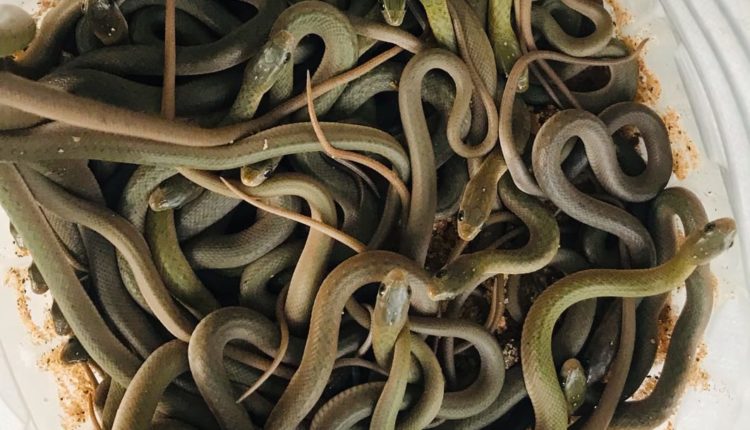 Angul: As many as 52 Asiatic water snake babies were rescued from a village in the district on Sunday.

On March 13, Bideshi Behera of Turang village near Angul town spotted a snake under asbestos sheets lying in the backyard of his house and informed Aditya Behera, a member of ‘Sarpamitra’, a snake helpline.

Aditya along with Radhamohan of ‘Sarpamitra’ arrived at Bideshi’s house to rescue the snake. They lifted the asbestos sheets and identified the snake as Asiatic water snake (Pani Dhanda in Odia). It was a female and had laid around 65 eggs there.

They rescued the mother snake and left her at a safe place nearby. They also took the eggs and kept those at a spot close to her.

After the usual incubation period of 21 days for the eggs to hatch, Aditya and his associate returned to the place where they had left the mother snake. They found 52 healthy snakelets had come out of their eggs.

They informed the local Forest officials and along with them took the snake and its hatchlings to release in a natural habitat in a forest.