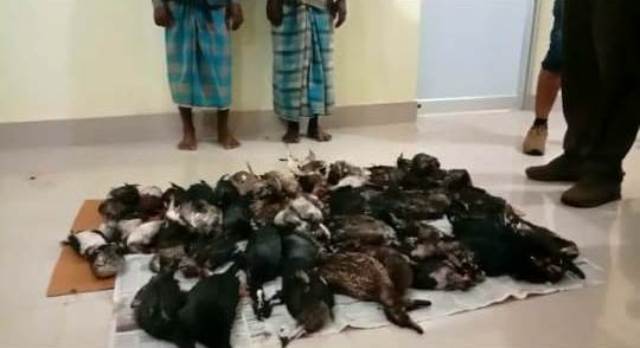 Tangi: The officials of Tangi Wildlife Range in Khurda have seized three live and 57 bullet-ridden carcasses of migratory birds. They have also arrested five poachers in this regard.

Tangi Range Officer, Chudamani Murmu said on Sunday that Forest staff were patrolling near Sorana in Kuda-I area in the vicinity of Chilika Lake when a motorboat tried to speed away. When the patrolling staff intercepted the boat, five persons attacked them with sharp weapons. Forest official Radhakanta Hota and three staffs Chandan Sahu, Seshadeb Parida and Ramesh Parida were injured in the attack. Despite injuries, they managed to overpower the attackers and arrested them.

“We have seized 57 dead birds that were shot dead and three live birds, an airgun, 500 cartridges, gunpowder and a knife from the arrested persons. They are Mumtaz Khan, Noor Ali Khan, Rama Chandra Behera, Dilip Behera and Kabi Sahu of Sorana village. We will forward the accused to court today,” Murmu said.

He further said that though the Forest Department has set up 20 camps at various locations in the lake area and intensified patrolling to keep a watch on poachers, there are stray incidents of poaching of these migratory birds as it is difficult to patrol the vast stretch of the lake due to acute shortage of manpower.

Trains In Odisha Affected By Anti-CAB Protests In Bengal