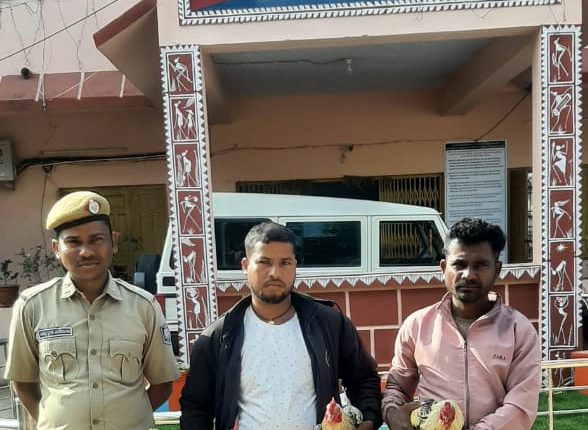 Malkangiri: In a bizarre incident, seven roosters are spending nights in Malkangiri and Balasore police stations.

According to sources, a team from Malkangiri model police station conducted raids at Pedabeda village under Gangala Panchayat on Tuesday after receiving a tip-off regarding cock fighting.

The cops arrested two persons identified as Gangadhar Madkami (37) and Brajakishore Bisoi (36) and seized three roosters, 10 knives, used in cock-fighting, and Rs 1200 cash. While the accused persons were forwarded to court on Wednesday, the police have engaged a person to take care of the birds.

“We could only nab two persons during the cock fighting as others managed to escape from the spot,” Model Police Station Officer-in-Charge K. Sangana said.

A similar incident also took place at Manjuripur village under Muruna panchayat in Balasore on Christmas. On the basis of a tip-off, a team from Simulia police station conducted raids at the place and nabbed four persons from the spot.

The cops seized four roosters from their possession and registered a case against the accused and released them after serving notices. However, they kept the birds.

Meanwhile, it is alleged by the locals that the cops have kept the cocks with an intention to satiate their taste buds on the occasion of the new year’s celebrations.