A Fresh Defence Of Criticism

A.O. Scott’s book Better Living Through Criticism: How to Think About Art, Pleasure, Beauty, and Truth is published by Penguin Books. 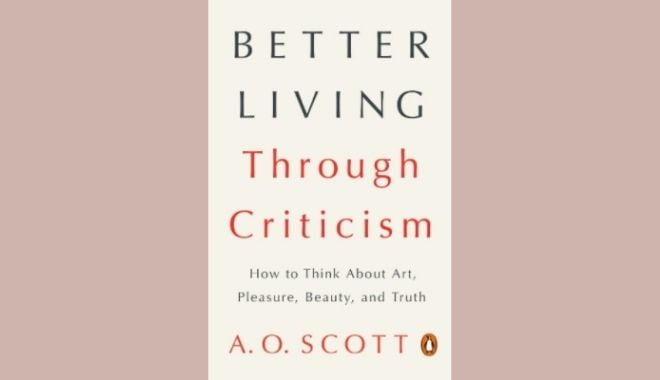 In early 2016 I came upon a remarkable book from reading a review of it in Sunday Book Review, New York Times, February 21, 2016. The book was titled Better Living Through Criticism: How to Think About Art, Pleasure, Beauty, and Truth. It was indeed delightful, though a little intriguing, that in this day and age a non-academic like Scott — he is a professional movie reviewer for New York Times — would care to write a book on the virtues of criticism when even the academics seemed to have given up on it.

Scott’s book, when I read it a few months later, seemed to me one of the finest in recent times on the necessary and mutually rewarding interplay of literature and criticism. In the mean time, however, I wrote a response to the review and published it as a ‘letter to the editor’ (Sunday Review, New York Times, March 16, 2016). My point was that Scott restated in an accessible language what the theoretical revolution of the 1960s had stated, and so the reviewer had missed out on an opportunity to relate Scott’s positive view of criticism to this ‘prior generic moment.’ These ideas to do with the independence of criticism, its non-self-effacing character and its proactive role in according meaning and value to literature, even in defining literariness itself are now among the stock-in-trade of academic literary discourse.

I was off the mark, as I discovered after reading the book. Scott probably had a different agenda. He wanted to have criticism do all those things that were ascribed to theory but without making theory’s exaggerated and fanciful claims about the ‘death of the author’ or of literature. By doing this he expressed confidence in the traditional practice of criticism, while in the same breath questioning the so called supremacy of theory.

Scott does not buy into either the distinction that is touted to exist between criticism and theory or into the idea of the supersession of criticism by theory from the 1960s onward. Unlike a whole bunch of books that were written in the 1970s and 1980s, it does not take the names of the stalwarts of the theoretical revolution such as Roland Barthes, Jacques Derrida, Michel Foucault, Julia Kristeva and the like. Nor does it even once use the word ‘theorize.’

The non-mention would seem to be not arbitrary or inadvertent, but deliberate, as the act of criticising for Scott involves the kind of detailed, comprehensive and engaged attention to a literary text that theory or critique aims at but can deliver only at the expense of clarity and intelligibility. Scott’s book serves as a useful reminder of the insights criticism can deliver without resorting to highfalutin. Talking about the truly creative criticism, Scott cites Oscar Wilde: ‘to see in a work something that the author had not put there.’ Now this is an anticipation of the Macheryean idea of the ‘not-said’ or the ‘unconscious’ of the text discoverable through ‘symptomatic reading.’ But it is expressed in a way that is not mystifying or obfuscating at all.

On the vital question of the relationship between literature and criticism, Scott considers criticism indispensable, even integral, to creation. He does not, however, go to the point of asserting — a la theory — that literature is the function of criticism. That theory makes this absurd claim would seem to be a consequence of the incorporation of literature into the academy,. Scott’s statement in this context that ‘criticism is art’s jealous, late born twin’ puts the matter in the right perspective and rids us of the delusion that in writing about, say, Shakespeare or Kalidasa, the critic can claim equal status with them.

This does not mean that the critic plays second fiddle to the creative writer or that he is a parasite. Scott’s approving citation of the American critic H.L. Mencken (1880-1956) would seem to plead against such a view. Mencken had little patience with criticism that is mere eulogy or simple summarising. In an essay he wrote in 1926 — “Footnote on Criticism” — he reserves the term ‘reviewing’ for this. Genuine criticism, Mencken says, is interrogative. In the beautiful phrasing of Mencken, it is to ‘get rid of ideas dramatically and make an articulate noise in the world.’

So the critic is important after all, but criticism has its own sphere of importance, which is not be confused with that of art. Scott defines the two distinct spheres beautifully and succinctly: ‘it is the purpose of art to set us free and it is the task of criticism to tell us what to do with that freedom.’

Scott’s book undertakes a timely and vigorous defence of criticism we can all learn from.