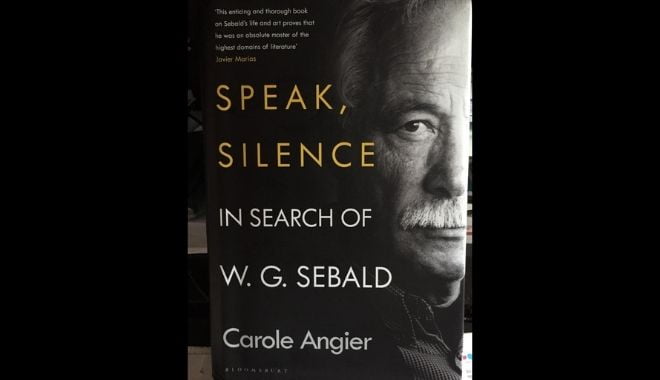 He who was close to us
From far off seemed to have come
To our uncanny homeland,
Only a searching for traces
With a divining rod of words
That quivered in his hand.
Across conflagration sites and burying places
He followed it through to raving madness
On Suffolk heaths.

Is this the promised land?

Earlier the dark had encroached,
But he moved on,
Through all those nightmares
Undaunted made his way.
That dust became light for him
We know from three lines alone
So soundless I glided
Scarcely stirring a wing
High up above the earth.

“A Parting from Max Sebald” by Hans Magnus  Enzensberger

German writer and academic W.G. Sebald, born in 1944, died in a car crash in Norwich on December 14, 2001. He was only 57. He was a Professor of German Literature at the University of East Anglia in Norwich at the time of his death. Only four of his fictional works were published by then. Although he has one long poem and a few collections of essays to his credit too, his fame rests on the four fictions – Vertigo, The Emigrants, The Rings of Saturn and Austerlitz – that were hailed as great successes immediately upon publication, first in German and then in English translation. Sebald has been regarded, with Primo Levi, as a major spokesperson for the Jewish diaspora. He has made memory speak with greater urgency and power than any other late 20th century writer, with the possible exception again of Primo Levi.

The Sebald Fever of the 21st Century

It was expected that in a literary climate that continues to be fed by a never ending stream of publications from living writers, both established and new, a dead author like Sebald with a slender output that gives no concession to the fashionable subject of decolonisation and ‘empire writes/strikes back’ – witness the literature Nobel for 2021 – would soon sink without any trace. Mercifully this didn’t happen. A Sebald fever or mania swept through the literary culture of the Global North right from the second decade of the 21st century. New assessments by major critics and academics began appearing punctually in The New Yorker, Lit Hub, The Guardian, and The Observer. On September 19, 2019, The Guardian released its list of the 100 best books of the 21st century, placing Austerlitz at number 6. It was as if all this hectic stock taking and soul searching was a prelude to the publication in June this year of the much-anticipated biography of the author by Carole Angier.

The book, in self-confessed imitation of an eponymous work by Sebald’s friend Idris Perry, is called Speak, Silence. More importantly, however, it is a significant recall and echo of Vladimir’s Nabokov’s memoir Speak, Memory, a favourite of Sebald himself. The subtitle reads In Search of W.G. Sebald. The voluminous biography has opened to rave reviews in the international press and has justly been seen as a remarkable book in terms of light shed both on the obscure life of Sebald and on his immensely sophisticated, genre-defying literary art that seamlessly blends fact, fiction, memoir, travelogue, documents and photographs.

Thanks to Angier’s painstaking research we now know that Sebald was a lower Bavaria-born German whose grim and pessimistic outlook on life was formed by two significant events in his early childhood. One was the death of his maternal grandfather with whom he shared unusually close ties. The second was the upheaval his emotional life went through when his absent father returned from military service somewhere in France to claim his place and patriarchal privileges in the household. Sebald, born Winfried, was five then. With this return there came a removal from Wertach, the village of his birth, to the small town of Sonthofen where the young Sebald began his schooling. He could never come to terms with this external intrusion of authority, especially after he knew that it was tinged with the crime of his father’s participation in German Army. The Oedipal anger coupled with a righteous indignation against an unjust regime made him a rebel. It is a streak that continued with him in his subsequent educational trajectory, which took him through Freiburg University, Fribourg University – along the line he self-transformed into Max Sebald from Winfried Sebald – University of Manchester, ending finally at the University of East Anglia where he transited from a student to a teacher in 1970. In the mean time he had found the big subject that would preoccupy him, the trauma of the Jewish people who had gone through the Nurnberg Laws and Auschwitz.

It is at UEA that Sebald spent the last three decades of his life, becoming a Full Professor, the first Director of the British Centre for Literary Translation, and, more importantly, a writer of a now vanished breed, namely a great writer like Kafka whom he himself taught at UEA for decades. Angier’s elaborate and detailed recounting of every phase of Sebald’s life, education, friendship, pastimes and passions is too complex to be reiterated here. At 617 pages the book is a tome. I would be the last person to want to forestall any of the pleasures that would accrue to the interested reader who wants to track Angier retracing the footprints of Sebald across the Wertach and Norfolk snow, ice and dust in Speak, Silence. Instead, I would like to draw out the profound consequences that Angier’s book has for biographical criticism. It seems to me that Angier’s nuanced, sensitive and subtle approach to her subject can contribute to the resurgence of the genre of biographical criticism that has fallen into ruins thanks to the systematic onslaughts of ‘the words on the page’ kind of criticism that both New Criticism and New New Criticism have promoted.

At page 398 of her book Angier, having completed her tour of Sebald’s extraordinary social and literary life, makes an interesting remark. “This”, she says, “is a biography, not a work of literary criticism.” It is as though she suddenly became conscious of her Sebald-like forays across the line dividing life writing and writing about literary works that criticism is and wanted to stay on the beaten track of biography. Interestingly, she has throughout breached that divide and written with remarkable flair, gusto and deep understanding about the unique style of writing that Sebald forged by tracing its sources in the author’s life, time and circumstances.

The great theme of Sebald’s four books is, as is now well known, the Holocaust and the German silence about it. He wrote poignantly about the Jewish tragedy under the Third Reich, the trauma of the survivors, leading to loss of memory, and survivor guilt felt by the emigrants who chose assimilation into the mainstream in their adoptive countries and repressed their trauma, often with tragic results. Sebald also wrote with equal trenchancy about the silence of the West about the Allied bombing of German cities like Hamburg and Dresden. In short, Sebald made it a point to write about the victim in every circumstance and fashioned a complex literary art that was sensitised not only to the ‘roar that lies on the other side of silence’ (a quote from George Eliot in Middlemarch that Angier cites) but also to the operation of chance and coincidence in the creation of victimhood, death and desolation. In a replay of the classic existentialist fiction of Kafka, Musil and Walser he created characters who were utter loners, condemned to wandering the earth endlessly. In a significant act of osmosis ever witnessed in literary history, Sebald also became one with his exiles like Paul Bereyter, Max Ferber and Jacques Austerlitz, and, above all, the I-narrator of his works, feeling neither at home in his English life nor indeed anywhere else in the world.

The Deepening of Hold of the Sebald Mystic

Angier’s meticulous unearthing of facts behind the real-seeming stories of Max Sebald leads to some of the most astounding of discoveries about the writer. I would like to outline a few of these. One, as Angier pointedly observes, ‘Behind the Jewish theme lies a non-Jewish model’ (p. 75). Though Sebald wrote acutely about the Jewish victims suffering PTSD, he himself was non-Jewish. More importantly, the real-life models he used for his characters were often non-Jewish or Jewish at several removes. Behind Dr. Henry Selwyn, the Jewish emigrant, lies Dr. Philip Rhoades Buckton, who is a true blue English man.  Likewise, behind Paul Bereyter, who is one-fourth Jewish, lies the real-life Armin Muller, who, though quarter Jewish like Paul, and, who supplied to Sebald the scene of Paul’s death by suicide on the railway track, is not as persecuted and hunted a figure as Paul. The other shocking discovery is Sebald’s blatant stealing of other people’s books, documents and diaries for his own purpose without due acknowledgement. Angier talks about Sebald’s ruthless plunder of a memoir by his friend Peter Jordan’s sister Thea in the memoir that he attributes to Max Ferber’s mother in the story of the same name in The Emigrants. And, finally, there is the biggest shocker of all: the lie of the photographs that Sebald’s stories and narratives are interspersed with and are thought to be the guarantors of the solidity of his world. They are not of the persons and places they purportedly are of. The photographs seem to be attesting to the truth of the transactions in the stories in the same deceptive way as the declaration ‘This is a true story’ at the start of Fargo (1996) seems to be doing for the iconic Joel and Ethan Coen film. That is to say, they produce the reality effect or the illusion of the real. They are a ruse to lure us into the labyrinthine world of Sebald’s fictions and to confirm the mystic hold of the writer on our fragile minds.

Angier has taken both the art of biography and the art of literary criticism to new heights precisely by wanting to know about the person behind the personas in his literary creations. In the process she has produced a bio-critique of supreme beauty in which the man and the mask have become one. If there is one lack that I found in this wonderful biography of Max Sebald, it is the beautiful obituary verse entitled “A Parting from Max Sebald” that Hans Magnus Enzensberger wrote for his friend, and, which I have given as an epigraph to this review essay.