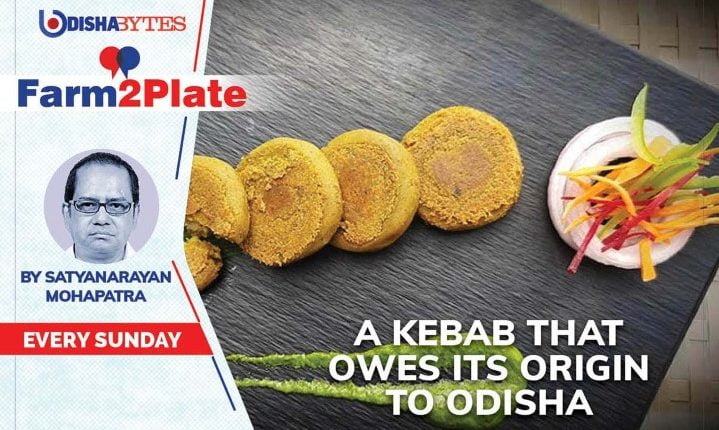 Legends have it that Dalma was a gift from the Savaras, the non-Aryan tribe of Odisha known for their social harmony. They were the first to worship Lord Jagannath as Neela Mahadev and one of the offerings to the Lord was Dalma.

Yet another tale on this ancient recipe relates to the Mahabharata. Bheema, one of the Pandava brothers, entered the Kingdom of Viraat to hide for the 13th year, and worked in the king’s kitchen. He curated the dish as done by Draupadi for Lord Krishna — the Hobiso Dalma — by setting the pot on boil and began throwing a handful or two of whatever was in sight. What he created after a good 45 minutes was presented with ghee.

Dalma, a typically Odisha dish, is essentially yellow dal cooked with plenty of vegetables, preferably of the local variety like brinjal, radish, pumpkin, raw banana, gourd, saru (taro), sweet potato (not the root variety), beans, raw jack fruit, jack fruit seed, drum stick, among others, and then tomato and potato, which committed conservatives still shun since they regard these as non-local vegetables.

One can choose at least two or three of these vegetables and the now-inevitable tomato. Dalma is thick, and it’s not sour at all. To make it tastier, there is the stuff that can be added to it liberally, like delicately cut pieces of coconut, jeera powder and kali mirch (black pepper) — seed or powder — other spices and garnishing as per choice as well. The hardened non-vegetarian would put some deep-fried small fish or small prawns in the dalma for taste or aroma.

At Vivanta’s Mynt, ‘Dalma Kebab’ is definitely the show-stopper. On this, we had a tete-a-tete with Executive Chef Sayantan of Vivanta. He discussed his tryst with Dalma while at Taj Bengal and shared how he curated the gastronomic delight. He used all the necessary spices, ingredients and vegetables in the Dalma Kebab, thus not deviating from the Dalma DNA. The Kebab mix consists of chana dal and vegetables which are boiled with spices consisting of green chillies, mint, cumin, turmeric, coriander, garam masala powder along with whole garam masala and brown onion. These are boiled till the entire water is soaked in, thus the flavour of spices are absorbed by the lentil (chana dal).

Then it is spread to cool off. It is then grinded to a fine paste along with cheese. The paste is made into soft balls and are ready for the stuffing to be put in. The stuffing consists of sweet potato, potato, green banana, green chillies, coriander leaves, ginger. These are finely chopped and sautéed till there is very less or no moisture and mixed with grated cheese. It is then shaped into tikkis which are girdled, basted with clarified butter and served hot.

The proportion of chana dal and gram flour has been added in right proportion, to make the kebab soft and moist. As it has been girdled on a hot plate, it is more moist and has a nice soft texture. The best part is that the kebab does not crumble when it is spooned for a mouthful. The tannin and starchy after taste are cut clean by the cheese which is added to the stuffing.

For a connoisseur, no story of Dalma can be complete without a mention of the small eatery of Brundabana Sahu, more known as Burundu Sahu of Puri, Sometimes one would ask for hot puris, but he would say, “Sir, have the dalma with hot roti.”

I remembered his words — the Dalma Kebab with hot rotis and green chutney was divine. This kebab can be eaten as a starter or an accompaniment.

The name ‘Keba’ was first found in a Turkish script of Kyssa-i Yusuf in 1377, which is the oldest known source where kebab is stated as a food item. Ibn Battuta, the famous Moroccan traveller, has mentioned that Kebab was an integral part of the daily diet of Indian royalty as early as 1200 AD. The Afghan plunderers and invaders brought it to the Indian kitchens long before the Mughals ventured in.

The pre-Mughal Kebab was more about marinade and meat being more of rustic chewy chunks, char-grilled in open ovens. With Mughals, it evolved into a delicacy that was soft and succulent, made richer with aromatic spices and dry fruits.

Over time, Indian chefs changed the form of the seekh kebab and began sculpting it as a round patty. Haji Murad Ali further perfected these kebabs, with the chef extraordinaire coming up with the renowned Tunday Kebab or Galouti Kebab.

Then, there’s the Kakori Kebab, a cousin of the Indian seekh kebab. It’s made of finely minced meat tenderised by Malihabadi mangoes. The Kakori Kebab has a thin membrane, which encases rich minced meat. The consensus is that Kakori is the more difficult kebab to make because the raw mince mixture has to stay on the skewer (not easy to do with such a rich concoction) and the cooking must be flawless, with the flame just the right distance away from the kebab so that a perfect membrane forms.

The Kakori came from the village of Kakori and is of more recent origin. A Kakori mixture has cashew paste, khoya (sometimes) and added fat (usually from the kidneys) to give it the rich, melting quality that characterises the kebab. The Galouti is the gilawat or the tenderising of the meat by adding papaya to break down the fibres.

As for the artistic Nargisi Kebabs (boiled eggs covered in minced meat and fried), it seems that when you cut the kebab in quarters, the yellow inside the white inside the meaty layer looks like the flower nargis (daffodil). Last, but not the least, the kebab that depends on the tandoor. It is this tradition that gives rise to dishes unknown in the Middle East or even in Lucknow — tandoori chicken, barrah kebab, chicken tikka etc. These kebabs/dishes don’t require any secret masalas and are relatively easy to make.

But kebab in the Indian context is not just about meat. In fact, some delectable Indian variations like Hariali Kebab, Paneer Tikka and Dahi Ke Kebab owe their origin to India.

And now, the Dalma Kebab owes its origin to Odisha. Kudos to Vivanta and Chef Sayantan.