ABVP To Launch ‘Save Bengal’ Movement From Jan 6 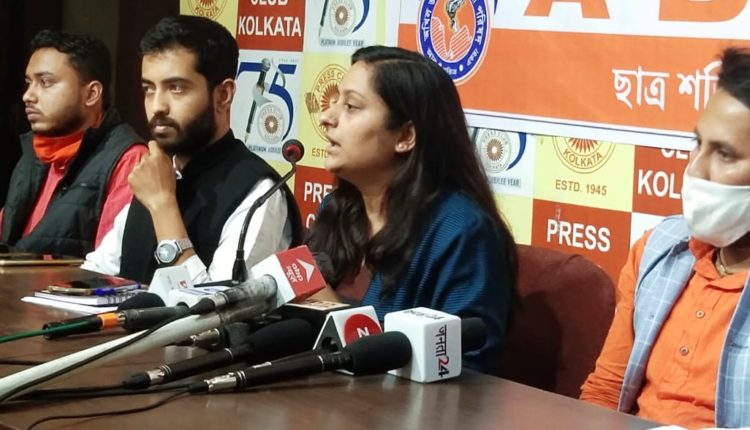 Kolkata: The West Bengal wing of Akhil Bharatiya Vidyarthi Parishad (ABVP) on Monday announced elaborate plans as part of their ‘save Bengal movement’.

The students’ wing has planned activities in every district to restore normalcy in the state’s educational institutions based on a five-point agenda.

“People who express their opinion against the ruling dispensation here are being liquidated. Many students who don’t belong to the government-affiliated student’s union are being attacked regularly. The increasing devaluation of the educational institutions and rising unemployment are all evidence of the misrule of 10 years of Trinamool Congress government,” said an ABVP leader.

ABVP leaders also spoke about the rise in crimes against women and violence in campuses across the state.

To uproot the ‘Hitler-styled governance in Bengal’, ABVP called for a ‘Bangla bachao andolon (save Bangla agitation) by uniting the youth force in the state.

ABVP’s agitation will focus on five points — security for women and hence a secure Bengal; education and not doles along with job creation; peace, instead of violence; restoration of democratic rights; end of appeasement politics and better infrastructure at educational institutions with focus on job-oriented education.

Rallies will be organized from January 6 in all districts, where deputations will be submitted to the district magistrates on the above issues.

To make it a mass movement, there will be events like marathon runs, street shows and discussions. There will also be meetings with intellectuals at five different points in the state.