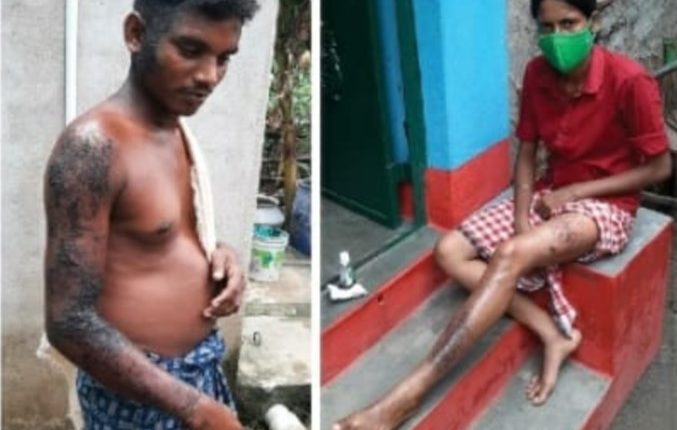 Bhubaneswar: Taking suo motu cognizance of a complaint about acid being used to treat snakebite victims, the Odisha Human Rights Commission (OHRC) on Thursday sought a report from Dhenkanal Collector and SP within 15 days.

He had come across a quack, ‘Suka Barik’, who used acid to treat snakebite victims during his recent to Mrudangapalli village under Motanga police limits in Dhenkanak district.

He had found three such cases during his short stay at the village.

He said that Sarita Mohapatra (25) of the village was reportedly bitten by a snake around 11.30 pm on August 17. The girl was taken to Suka Barik, who applied acid on the victim’s leg and thigh. Within 24 hours, the victim suffered severe acid burn injuries.

The quack used the same method to treat Subhashree Mohapatra (46) and Niranjan Behera (30) of the village, who had suffered scorpion and snakebite envenomation respectively.

“I am pretty sure that the quack is using acid because he used a brush to apply it on human body. The practice of acid as chemical burning was practised before 1900. This method was long banned in India and as well in Odisha,” Mallick wrote.

Notably, Odisha is among a very few states where snakebites are being centrally monitored through Odisha State Disaster Management Authority (OSDMA).

Stating that the quack was making a mockery of the state government’s policies, Mallick demanded stringent action against him.

He also requested the government to direct the Dhenkanal CDMO to conduct a survey at Balaramprasad area to identify acid-burnt victims in the district.

#ResignParambirSingh Trends On Twitter After SC Verdict In Sushant Case

Meet Miracle Siblings Of Odisha Who Can Read & See Blindfolded

COVID Spike: OHRC Office In Bhubaneswar Closed Till May 13