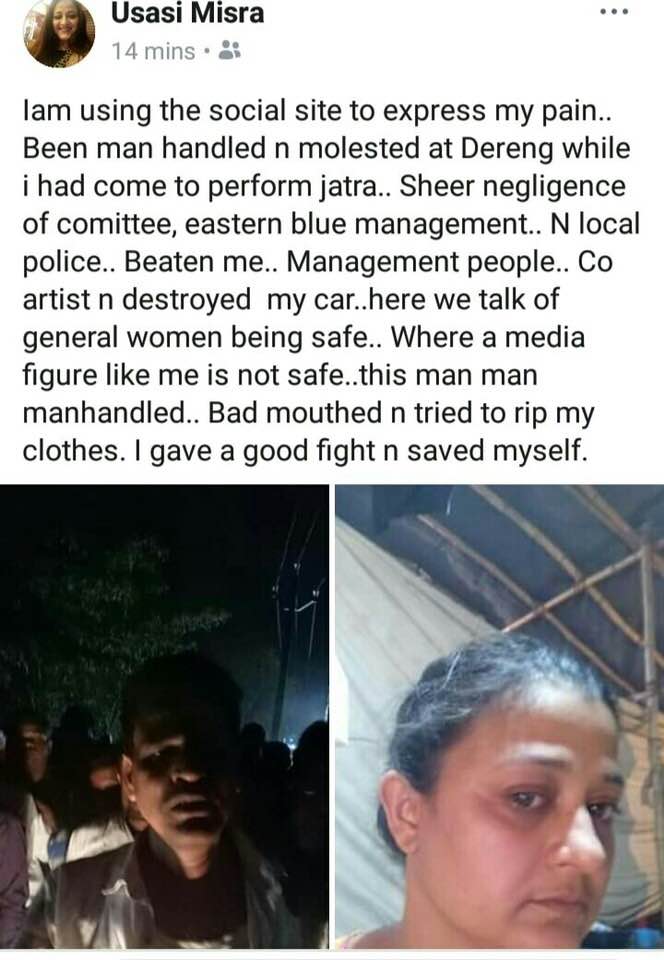 The detainee, Dushmant Behera, has allegedly thrashed the actress. He is the driver of one Indramani Sahu, who had allegedly manhandled the actress along with his two sons at Derang village in Kaniha of Odisha’s Angul district around 3 am on Sunday night.

In a social media post, Usasi has alleged had she was beaten up and molested at Derang, where she had gone to perform in an opera, owned by Eastern Blue. She alleged that her car was also damaged. “We talk of general women being safe….where a media figure like me is not safe..this man manhandled, badmouthed me n tried to rip my clothes,” she said, adding, “I gave a good fight and saved myself.”

Usasi had lodged a complaint at the Kaniha police station, alleging that while she and her managers were trying to reach the venue on her car to perform at the opera, a person abused her and behaved in an indecent manner. She said she initially tried to ward him off but subsequently got down from the vehicle. “I hit him and he also beat me up,” she said. “I thought the matter would end there. But later while I was on stage the man returned with his relatives and stopped the performance and manhandled me. They even threatened to strip me naked,” she added.

Kaniha police rushed to the spot and pacified the villagers. The opera show began after an hour.

Police sources said one Indramani Swain and his two sons allegedly manhandled the actress and even rebuked her with obscene language. They also damaged her car.

Inspector-in-charge of Kaniha police station Sukanti Kerketa confirmed the incident. Pallahada sub-divisional police officer Jasobant Samal said the villagers after coming to know that Usasi had arrived to perform rushed to the opera. During the rush, some people collided with her. At this, the actress got enraged and slapped Indramani.