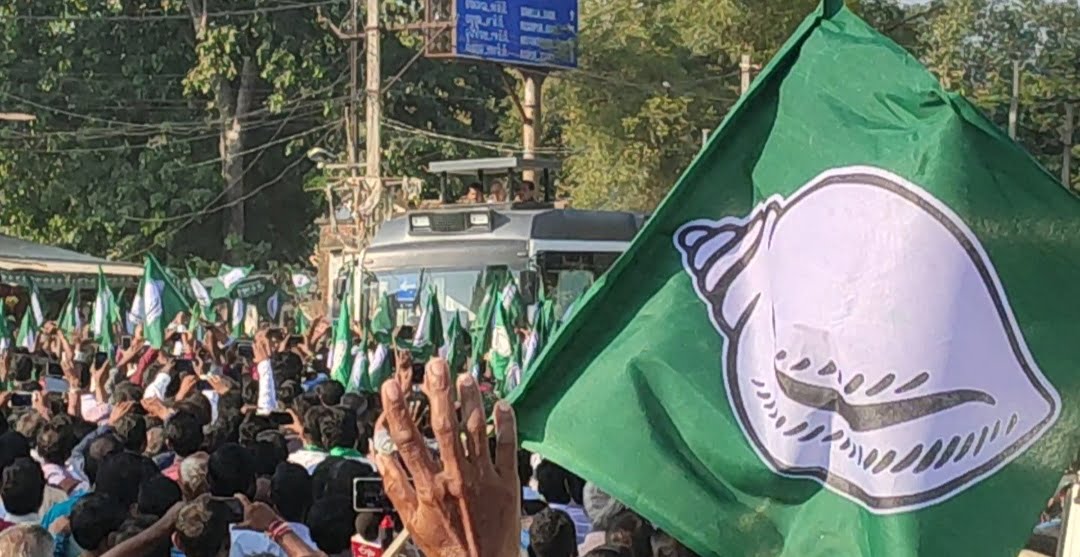 Bargarh: When senior Congress leader Suresh Routray said his party cannot match the number of posters and flags put up by the ruling BJD in Bijepur assembly constituency, which is going to polls on October 21, he was not far from the truth.

The three blocks – Bijepur, Barpali and Gaisilet – that form part of the poll-bound constituency, have turned green, literally, with huge hoardings and the party symbol, conch, painted large on flags fluttering in the wind.

We almost had to cringe our neck out of the vehicle to spot the Lotus and the Hand posters popping up along road stretches in these blocks, few and far between.

At some areas at Gaisilet, there are no signs of an impending election, no posters, no flags, no hoardings as if the results are a foregone conclusion.

“The BJD will win but what about people being denied KALIA benefits? Where are the irrigation projects? This school came up last year, but where are the teachers?” asks Monohara Barik of Kermali.

Notwithstanding the anger, the support for the Conch party and Chief Minister Naveen Patnaik is unshakable, said Bisikesan Barik, an ex-sarpanch of the village.

The triangular fight and high-octane campaign feels like a misnomer here. “Where are the leaders of other parties. Except Giridhar Gamang, no one has visited us from the BJP. There is no sign of Congress here,” said Ram Singh Deep of the village.

Some villagers expressed resentment and accused BJD candidate Rita Sahu of benefiting the Congress workers and ignoring those belonging to the regional party.

Rita is the widow of Bijepur’s former Congress MLA Subal Sahu, who won three polls on the trot and represented the constituency between 2004 and 2017. His untimely death in August 2017 led to a bypoll in February 2018, in which Rita contested on BJD ticket and won. The CM, contesting for the first time from two Assembly seats, won the Bijepur seat in the April-May simultaneous polls. Another bypoll was necessitated after Naveen decided to retain his home constituency Hinjili and vacated Bijepur. While some find it irritating, others point at the development it has brought with it.

“The Bijepur road was built just before the 2018 bypoll,” said Sai, a taxi driver, as we headed towards Bijepur.

BJD Leaving Nothing To Chance

Sushant Singh, who has won three consecutive election from Bhatli in Bargarh Lok Sabha Constituency, holds a sway over the electorate in Bijepur. “He cleaned the pond and continues to work for us. He has also assured jobs for our children. We will vote for Conch party,” said Neelima of Bijepur.

Besides Singh, several ministers, including Prafulla Mallick, Padmanabha Behera and Snehangini Chhuria, and nearly ten senior leaders from the coastal belt are camping in Bijepur for the past five days.

After an unimpressive show in the 2017 panchayat elections, the party responded quickly,
mobilising its workers to further consolidate the organisation. The efforts showed positive results and it won the 2018 by-election.

The party is continuing with the same tempo this time too with Naveen holding road shows in the constituency and making a rare night halt here.

Most villagers express support to Naveen and the BJD. But the whimpers over gaps in its farm scheme, KALIA, can also be heard here.

As we reached Talpadar in Bijepur block, flags and posters of Congress greeted us for a change. A stage was put up for Congress leaders Niranjan Patnaik and Narasingha Mishra to address the voters. However, not a single soul could be found at the spot.

At the fag-end of the village, we meet an elderly man in his 80s running a small shop. He was the lone voice and his flagging support for the Congress was a reflection of the party’s state in the constituency and the state.

The Congress, after winning the seat consecutively for three times, lost its deposit in 2018 bypoll.

However, the name Subal Sahu continues to ring a bell. “The man won election. People voted for him and not any party,” Alok Kumhar, a businessman said.

Congress is yet to recover from his loss.

With senior leaders conceding defeat even before the polls and almost missing from the campaign trail, the party candidate, Dilip Panda, is fighting a lost battle with a handful of supporters.

Barpali is Rita Sahu’s home and hence, the support immense. Except for a small van clad in BJP’s saffron colour and spreading the party message among the electorate, the colour green dominates the skyline. “She is our leader and easily accessible. We will vote for her,” said Kanti Mishra of Bijepur.

BJP – Where Are You?

BJP candidate Sanat Gartia also has some base in the adjoining villages of Buromunda and Badhupali in Bijepur block where people speak about Narendra Modi and the Lotus party, though the saffronites are conspicuous by their absence. “Gartia can win support of SC and ST in the constituency, but his lacklustre campaigning is doing him no good,” added Alok.

BJP’s campaigning is being seen by many as a formality. This is in sharp contrast to 2018 bypoll when upbeat over its spectacular results in the panchayat elections, the saffron party had national leaders, including Smriti Irani, campaign for its candidate.

The saffron outfit finished third in the 2009 election and polled little over 30,000 votes in the 2014 Assembly election.

The BJP was over confident of winning the 2018 by-poll, having won six of the seven ZP seats in Bijepur assembly constituency. Though it almost doubled its vote share with Ashok Panigrahi garnering over 60,000 votes, the defeat came as a shock for the party which aimed to grab 120 seats in 2019 Assembly elections in Odisha. It seems to have not recovered from it.

With Panigrahi deserting the party and throwing his weight behind the BJD candidate, the BJP is sure to lose some of its votes.

How much difference Union Ministers Dharmendra Pradhan and Pratap Sarangi can do to the campaign, bereft of any star campaigner, will determine the party’s fortune on October 24 when the results will be declared.

COVID-19: Mandatory Hand Wash Before Entering This Village In Odisha