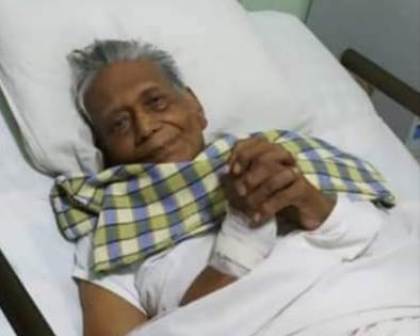 Bhubaneswar: Eminent litterateur Manoj Das was shifted to the Postgraduate Medical Education and Research (JIPMER) in Puducherry on Wednesday evening.

JIPMER sources said Das is admitted in the hospital’s oncology ward. A team of four doctors led by the head of Oncology Department, Dr Biswajit Das, is supervising his treatment, they added.

Earlier, Das was undergoing treatment under the supervision of Dr Ashok Kumar Das at the Sri Aurobindo Ashram Nursing Home for nearly three months due to old-age related ailments.

He had suffered a fracture on one of his hands recently. But as there was no substantial improvement in his condition, there was a demand for his special treatment.

Acting on the request, the Health Ministry has formed a four-member team of doctors of JIPMER for the treatment of the celebrated author.

Besides, Chief Minister Naveen Patnaik had also spoken to Dr Ashok Kumar Das treating Das and assured all help for his treatment.

To oversee the health condition of Das, the Chief Minister had directed the Health Department to send a senior doctor to Puducherry.

Acting on a directive from the Chief Minister, the Dean of Sri Jagannath Medical College and Hospital in Puri, Dr Biranchi Narayan Mohapatra, had visited Das at the Sri Aurobindo Ashram on Wednesday. Mohapatra had also talked to the four-member medical team of JIPMER about the nature of the treatment.

During the meeting, the team had suggested that as a new medicine will be given to Das, he should be shifted to JIPMER to monitor his condition.

Acting on the suggestion, Das was shifted to JIPMER at 6 pm.