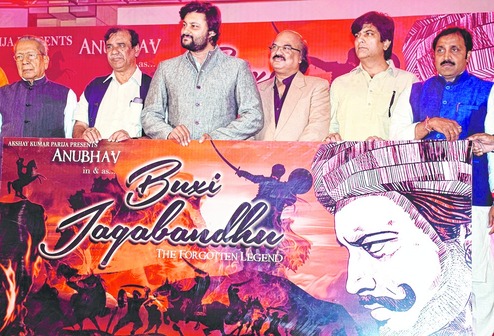 The Paika Rebellion against the British has caught the fancy of the nation with the Government of India commemorating the 200th Anniversary of the armed rebellion against the British East India Company’s rule in Odisha in 1817 with year-long programme.
However, a movie on Buxi Jagabandhu, who had led the uprising, announced by Dubai-based Odia businessman and filmmaker Akshay Parija in 2016 is still hanging fire.
Parija had roped in national award winning director Manmohan Mohapatra for the movie and Anubhav Mohanty was to play the titular role.
The filmmaker, whose passion for cinema saw him giving Ollywood several of its hits, had big plans for the movie. Internationally acclaimed technicians like Oscar-winning sound designer Resul Pookutty (‘Slumdog Millionnaire’), national award winning music composer Isaac Thomas Kottukapally, Australian cinematographer Ross W Clarkson, editor of Firaaq fame A Sreekar Prasad and Baahubali: The Beginning’s visual effects designer V Srinivas Mohan were associated with the film. He had picked Thailand-based Kaecha Kampakdee for stunts and action, while screenplay and dialogues were supposed to be written by Nandalal Mohapatra and Bijay Malla respectively.
As earlier announced by Parija, the film was supposed to hit theatres on August 15 this year.
With the current hullabaloo around this historic struggle for freedom from the foreign rule, the film, if completed on time, would have stood as a testimony to Odisha’s rich history.
Shedding light on the delay in getting the project off the ground, Parija said, “We had expected the Odisha government to support the movie with a budget of 14 crore. It would be impossible for us to go ahead alone considering the huge budget involved. Talks are on and we are hopeful of a positive outcome.”

Youths clash with police during Ganesh idol immersion in city