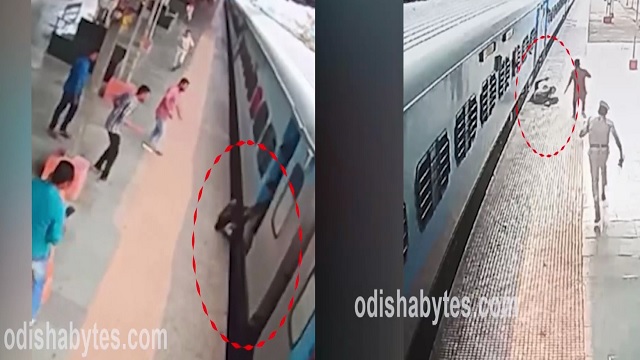 Jajpur: An alert Railway Protection Force (RPF) personnel helped avert a tragedy by saving a passenger from getting under the wheels of a moving train at the railway station in Odisha’s Jajpur on Tuesday.

The CCTV footage shows the passenger, identified as Sagar Kumar Patra, trying to get onto the Dhauli Express while it was leaving platform number 3 at 2:45 pm. As the train chugged ahead, Patra slipped and got dangerously close to the gap between the platform and the train.

He was saved by Railway Protection Force (RPF) constable Lal Bihari Ram, who was seen rushing to the spot and pulling the youth to safety even as another passenger held on to him from inside the train.

RPF Ram also asked the train authorities to reduce the speed. “The passenger returned to his home after he was found to be fully fit and healthy,” informed Jajpur Road RPF IIC.

Odisha: Elephants Slip Into Deep Slumber After Getting ‘Drunk’ On Mahau

Novel Initiative: Education To Include ‘Grooming Lessons’ For Students In Odisha’s Sundargarh