Alia Bhatt Starrer ‘Sadak 2’ Becomes Most Disliked Trailer On YouTube With Over 5.6 M ‘Thumbs Down’ 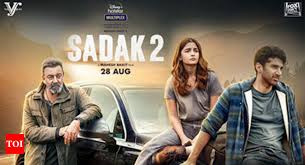 Mumbai: Twenty four hours after it was released, it has emerged that the trailer of filmmaker Mahesh Bhatt’s ‘Sadak 2’  is the most disliked video on YouTube.

Starring Alia Bhatt, Aditya Roy Kapur, and Sanjay Dutt in the leading roles, the ‘Sadak 2’ trailer has found itself in the mid of controversy and has received backlash from netizens. The trailer was mocked massively by netizens who rallied together to hit the dislike button on YouTube as a protest against nepotism and banning star kids.

According to Pinkvilla, the number of dislikes has hit a staggering 5.6 million downvotes on the video that was released on Fox Star Hindi’s YT channel. Alia, as Twitter reminded everyone, had spoken dismissively of Sushant on the chat show ‘Koffee With Karan’. Her proximity to filmmaker Karan Johar – rumoured to have joined other producers in shutting Sushant out of films – also triggered a backlash, amid renewed criticism of nepotism and favouritism in the film industry.

‘Sadak 2’ is produced by Vishesh Films and is the first collaboration between father Mahesh Bhatt and daughter Alia. The film is slated to release on August 28 on DisneyPlus Hotstar.