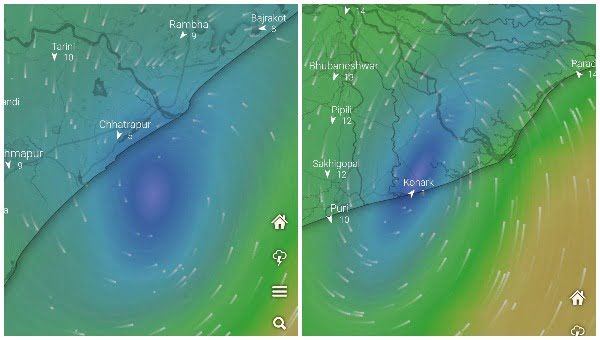 Bhubaneswar: Cyclone Jawad will move northwestwards and reach the west-central Bay of Bengal off north Andhra Pradesh-south Odisha coasts by Saturday. Thereafter, it is likely to recurve north-northeastwards and move along Odisha coast reaching Puri around Sunday noon. It is then likely to continue to move north-northeastwards towards the West Bengal coast, the India Meteorological Department (IMD) said on Friday.

The wind speed may reach 90 kmph gusting to 100 kmph in Puri and Jagatsinghpur. Ganjam, Khurda, Kendrapada and Cuttack may experience gale up to 60-80 kmph at the time of landfall, it added.

All leading MeT models, including INCOIS, NCEP-GFS, ECMWF and ACCESS-G3, have predicted that the cyclone will make landfall to the south of Puri around 12 pm on Sunday.

Post landfall, the system will pass over Jagatsinghpur and adjoining Kendrapada districts, only to emerge in the northwest Bay of Bengal. The weakened system will then head for West Bengal.

According to JTWC, the landfall is possible in Odisha (either Ganjam or Puri).

The European ECMWF model, however, has tracked the landfall to the Ganjam district near Chhatrapur/Rambha.