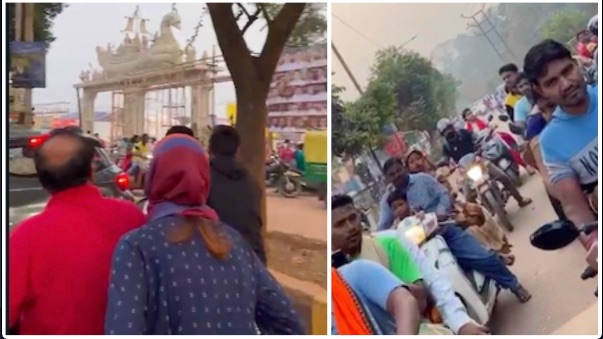 Cuttack: The nine-day Bali Jatra, the festival that commemorated the annual event in ancient Odisha where merchants would sail off to cities in Southeast Asia to trade with retreating monsoon winds powering their sails, will begin at Gadagadia ghat on the bank of Mahanadi on Tuesday.

For crowd management and smooth flow of vehicular traffic, the Commissionerate Police has imposed restrictions, which will begin from 3 pm till late at night daily, from November 8 to 16.

>> Three-wheelers and four-wheelers will not be allowed from Satichaura to Bali Jatra through Shleter Chhak and Kanika Chhak. The riders can go through Bidanasi Bandha Chaak and park their vehicles at Bhuasuni field.

>> Those coming from Madhusudan bridge side can also park vehicles on Bhuasuni field. From there, they can take the vehicles provided by the administration.

>> Three-wheelers and two-wheelers coming from Satichoura can ply through Shelter Chhak and Kanika Chhak and park on the field in front of Daya Ashram and the field situated to the left of Kartikeswar Gada.

>> Two-wheelers from Bhuasuni field and Chahata can ply up to Deer Park and park the vehicles in Kartikeswar Gada.

>> Vehicles coming from Deer Park will have to park on Christian field. From there, people can take vehicles arranged by the administration to reach the fairground.

>> Those travelling from Biju Patnaik Chhak can’t take the route through Dayashram road to reach the fairground. These vehicles can be parked in Christian field. The same goes for those coming from Kanika Chhak, Chandi Chhak, Samaj office

>> Only two-wheelers can ply from Biju Patnaik Chhak, Buxi Bazaar Fire Station Chhak and Chandi Chhak to Dayashram road and park in the field near it.

>> Vehicles coming from Girnar Hotel Square to Chief Justice Bungalow, from Nari Seva Sangha Square to the stadium and Killa Fort Gate to Baliyatra ground have to take diversion up to the nearest parking spots.

>> No vehicle is allowed from PHD office and Dayashram Chhak to Bali Jatra.

>> No vehicle is allowed from Nari Seva Sadan and Odisha Police Association Square to Madhusudan Statue.

>> All vehicles coming from Jobra and Matamatha can park in the space near Lower Bali Jatra ground. No vehicle is allowed from Chief Justice Bungalow on Ring Road to Gadgadia temple.

>> No vehicle is allowed from Howrah Motor and Mastan Dargha to the Madhusudan Statue. The vehicles can divert to the right side of Chief Justice Bungalow and park near Lower Bali Jatra ground.

A total of 50 platoons of forces have been deployed and 20 police aid and six traffic aid posts set up for crowd management. Besides CCTV cameras, eight watch towers have been set up on both the upper and lower Baliyatra grounds to keep a tab on troublemakers.

The police have also tightened security from Baliyatra ground to Cuttack railway station.

The Odisha Fire Service has also set up five temporary fire stations with the provision of four source pumps including one at Gadakhai and the other in Mahanadi river for uninterrupted water supply to the fire fighting units in case of emergency, Five rescue teams equipped with power boats have been deployed on the banks of the river. This apart, while two control rooms have been set up, 280 fire personnel will be deployed on the grounds.