Am Glad Bhubaneswar Is ‘Missing’ Me: Aparajita Sarangi 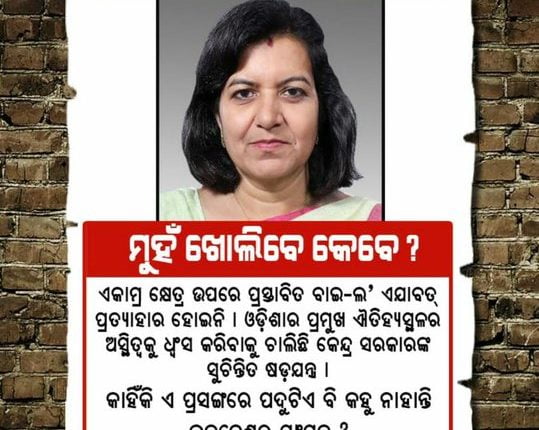 Bhubaneswar: Hours after ‘Aparajita Missing’ posters surfaced in the Odisha capital, Lok Sabha MP Aparajita Sarangi on Thursday said it was her duty to attend the ongoing budget session of Parliament in New Delhi.

She further said that she would be back in her constituency on February 15.

“Am amused that these posters have come up in Bhubaneswar at a time when the budget session of Parliament is on; it is my duty to be in the Lok Sabha now,” she tweeted, adding, “Am glad Bhubaneswar is ‘missing’ me. It is a great feeling, indeed! As always, I will be among my people from 15th Feb onwards.”

The posters had questioned her silence on the National Monuments Authority (NMA) draft heritage bylaws for Lingaraj Temple and Ekamra Kshetra region.

Speaking to media, Aparajita had said that she would discuss the matter with all stakeholders and understand the matter properly after returning to Bhubaneswar. “The Modi government is all for development but rules and regulations must be followed during such projects,” she added.