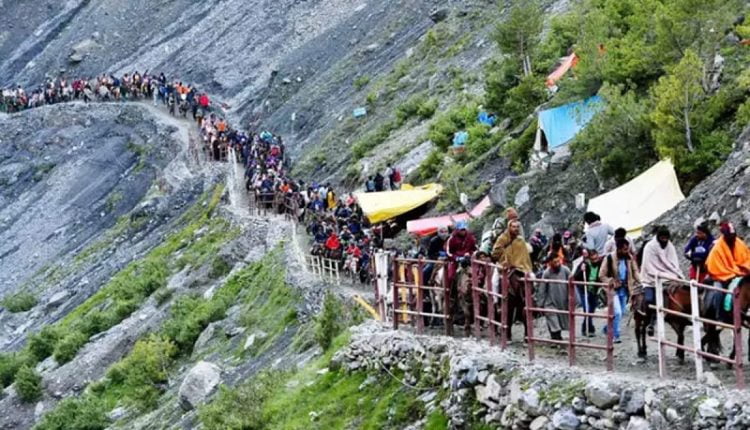 New Delhi: The Amarnath Yatra in Jammu and Kashmir has been temporarily suspended due to bad weather. The pilgrimage to the Amarnath cave had begun from two base camps – Nunwan in the Anantnag district and Baltal in the Ganderbal district – on June 30. Over 65,000 pilgrims visited the shrine till Tuesday, The Tribune reported.

However, no pilgrims are now being allowed to travel towards the holy cave from either of the two routes, the newspaper quoted unidentified officials as saying. Earlier on Tuesday, the sixth batch of 6,351 pilgrims had left for the shrine from the Bhagwati Nagar Yatri Niwas in Jammu in a convoy of 239 vehicles.

On Monday, Jammu and Kashmir Lieutenant Governor Manoj Sinha visited the Baltal base camp to interact with pilgrims. He inquired about the facilities being given to the pilgrims and inspected a control room to oversee arrangements for the journey.

In the Ganderbal district, a cloudburst caused by heavy rains led to flash floods on Tuesday, ANI reported. The floods led to the closure of the Srinagar-Leh highway. Several houses were inundated and some others were partially damaged in the floods.

IMD had predicted heavy rainfall in isolated parts of Jammu and Kashmir and Ladakh on Tuesday.

2nd Convocation Of KISS In Bhubaneswar: Students Called Upon To Contribute To Overall Good Of Humanity