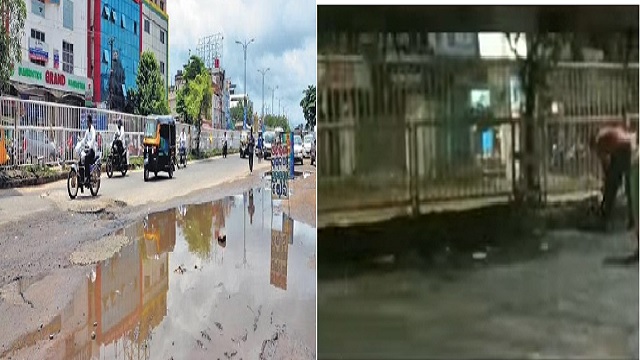 Cuttack: The road stretching from Link Road to the Badambadi bus stand in Cuttack, which was in a poor condition, has been repaired overnight in view of Union Home Minister Amit Shah’s two-day visit to Odisha.

Cuttack Mayor Subash Chandra Singh had told mediapersons a few days ago that repair work had been paused due to monsoon rains. However, the road has been completely repaired by Monday morning.

Local residents said they would be more than happy if Union ministers often visit Cuttack city so that roads get repaired urgently. All stones have been removed from the road and it has been cleaned, they said.

The 2.4-km-long busy road, which works as the entrance to Cuttack city, gets waterlogged for several hours even after a brief spell of rain.

Portions of the two-lane road plunge into darkness at night due to dysfunctional streetlights, which have been causing inconvenience to commuters as well as locals. Besides, citizens face a lot of difficulties while negotiating the road dotted with potholes.

It is pertinent to mention that in 2019, then Housing and Urban Development Minister Pratap Jena reviewed the condition of the road and drainage system and assured improvement and beautification. He had directed all departmental officials, including officials of Cuttack Municipal Corporation (CMC), to beautify the Badambadi area.

The Union Home Minister arrived in Odisha late on Sunday and offered prayers at Lingaraj Temple in Bhubaneswar on Monday morning following which he headed for Cuttack to attend the 75th-anniversary function of the Odia daily ‘Prajatantra’ at the indoor stadium in the city.

He also paid homage to Subhas Chandra Bose at Netaji Museum at Janakinath Bhawan in Odia Bazaar in Cuttack.