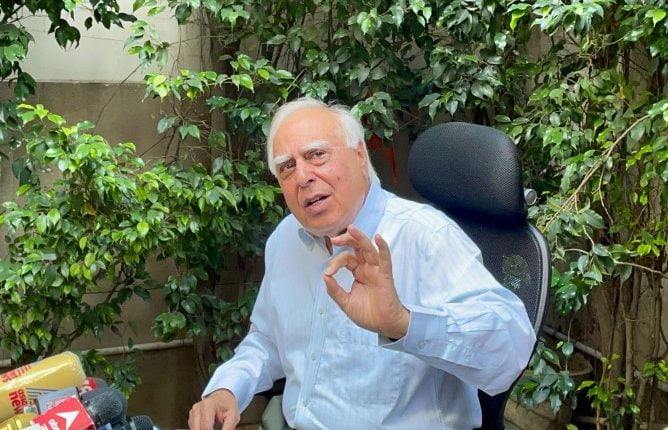 New Delhi: In a sad commentary on the state of judiciary in India, senior advocate Kapil Sibal lamented he has ‘no hope’ left in the Supreme Court.

Expressing his displeasure over some judgements passed by Supreme Court in recent times, the Rajya Sabha MP said: “If you think you will get relief from Supreme Court, you are hugely mistaken. And I am saying this after completing 50 years of practice in Supreme Court.”

Speaking at a People’s Tribunal on ‘Judicial Rollback of Civil Liberties’, organized by Campaign for Judicial Accountability and Reforms (CJAR), People’s Union for Civil Liberties (PUCL) and National Alliance of People’s movements (NAPM), Sibal observed that even if a landmark judgement is passed by the apex court, it hardly ever changes ground reality.

“This year I will complete 50 years of practising in the Supreme Court and, after 50 years, I feel I have no hopes from the institution. You talk about progressive judgements delivered by the Supreme Court, but there is huge difference of what happens at the ground level. Supreme Court gave judgement on privacy and ED officers come to your home… Where is your privacy?” said remarked.

Sibal was critical of the Supreme Court on a number of cases — for dismissing a petition filed by Zakia Jafri, widow of former Congress MP Ehsan Jafri, challenging the clean chit given by Special Investigation Team (SIT) to Prime Minister Narendra Modi and others in the 2002 Gujarat riots; upholding provisions of Prevention of Money Laundering Act which give vast powers to Enforcement Directorate; dismissing a plea filed in 2009 seeking an independent investigation into alleged incidents of extra-judicial killings of 17 tribals by security forces during anti-Naxal operations in Chhattisgarh.

All these judgements were passed by a bench headed by Justice AM Khanwilkar, now retired.

In a scathing comment, Sibal said that “sensitive cases” are assigned to select judges only and the legal fraternity usually knows the outcome of judgement beforehand.

“I do not want to talk like this about a Court where I have practised for 50 years, but the time has come. If we don’t speak, who will? The reality is such that any sensitive matter which we know has a problem is placed before certain judges and we know the outcome.”

Sibal was of the opinion the situation can change only if people change their mindset.

“In India, we have mai-baap culture, people fall at the feet of the powerful. But the time has come for the people to come out and demand protection of their rights,” he said.

“Independence is only possible when we stand up for our own rights and demand that independence,” he added.