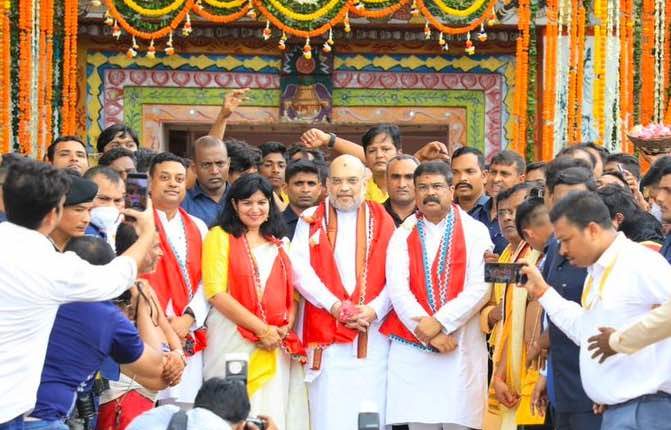 Bhubaneswar: Amid discussions of increasing bonhomie between BJD and BJP, especially during the President elections in July, Bhubaneswar MP Aparajita Sarangi here on Monday accused the ruling party in Odisha of not following protocols when Union Home Minister Amit Shah arrived in the state on a two-day visit the previous night.

“Minister of State (Home) Tusharkanti Behera was conspicuous by his absence when the Union Home Minister arrived at Biju Patnaik International Airport here. We were not expecting the state home minister since Chief Minister Naveen Patnaik shoulders that responsibility, but MoS should have been present,” she said.

Aparajita also questioned the absence of the Home Secretary and the DGP at the airport.” Special Secretary, Home, was sent to receive the Union Minister. I have been a bureaucrat and am aware of the rule book and protocols,” she asserted.

She further said that the Union Minister has always stood by the state, which is ruled by a non-NDA government, in a non-partisan manner. “Our tradition teaches us to humbly welcome a guest, however late it may be,” she added.

He arrives in Bhubaneswar around 1 am.

Notably, this is a much-hyped visit of Shah to Odisha amid speculation in political circles in the state that the saffron party is likely to harden its stance against the regional party with presidential and vice-presidential elections getting over and keeping the 2024 general elections in mind.

In both the elections, the Naveen Patnaik-led BJD backed the NDA candidates.

In the run-up to the 2019 elections, BJP with frequent campaign trips to Odisha by Narendra Modi had emerged as the biggest threat to the BJD government, which had come to power in the state in 2000. However, though BJP sought to install “double-engine” government – both at the centre and in the state,  it emerged as the main opposition.

Though Naveen continued to assert his party’s stand of maintaining equidistance both from the BJP and the Congress, events post 2019 Lok Sabha polls hinted at a growing closeness between the two parties. BJD not only decided to back BJP’s Om Birla for the Speaker’s post but also sprang a surprise by supporting the candidature of BJP’s Ashwini Vaishnav for Rajya Sabha from Odisha. This despite the fact that the party had the requisite strength in the State Assembly to send its candidates unopposed to the three vacant seats in the Upper House. The BJD also supported several controversial bills in Parliament to bail out the Centre.