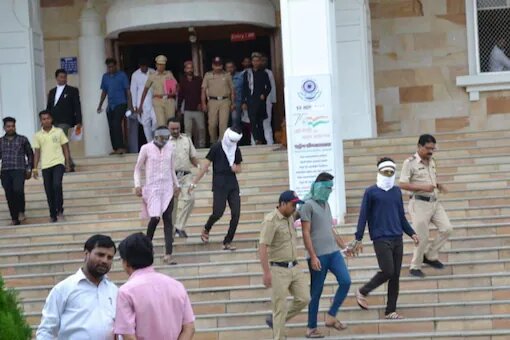 New Delhi: The killers of Amravati chemist Umesh Kolhe waited for more than 15 minutes before attacking him on June 21. A new CCTV footage shows the accused reaching the site of the incident beforehand.

Umesh Kolhe was attacked and killed by two men on a motorcycle on his way back from his medical shop in Maharashtra’s Amravati. He was killed a week before the murder of a tailor in Rajasthan’s Udaipur who claimed they were avenging an insult to Islam. In the video, three people can be seen reaching the spot of the crime 17 minutes before the murder. They are seen waiting for Kolhe. In the footage, the killers can be seen reaching the spot on a motorcycle, their faces covered with a black cloth.

Though the murder was committed at 10:27 pm, the accused arrived at the spot at 10:10 pm. The three accused hid beside a car before they attacked the chemist.

Kolhe’s post-mortem report has revealed that the stab on his neck was five-inch wide, seven-inch long and five-inch deep. The attack was carried out to ensure immediate death using a sharp weapon by a trained assailant, the post-mortem report said, adding that it aimed to target the nerves in the brain, throat and eyes, News18 reported.

Meanwhile, a report in NDTV has claimed that the first attempt to kill Umesh Kolhe was made on June 20, a day before he was murdered. However, Kolhe was spared that day because he closed his shop early at around 9.30 pm. The killers had expected him to shut his shop at around 10 to 10.30 pm.

The National Investigation Agency has taken over custody of all the seven accused, a police official was quoted as saying on Tuesday. He said that the NIA took custody of all the accused, who were granted four days’ transit remand on Monday after they were produced before the Amravati court.

The accused are likely to be produced before the NIA’s Mumbai court on or before July 8, the official added. Amravati police had found inks between social media posts supporting former BJP spokesperson Nupur Sharma and Umesh’s murder during the investigation and didn’t suppress the case as was alleged, police commissioner Arti Singh said on Monday, News18 reported.

Police are looking for one more suspect Shamim Ahmed in connection with the case. Umesh was allegedly attacked with a knife by a group of three men between 10 pm and 10:30 pm on June 21. He died during treatment at the hospital. He had supported a post on social media in support of Nupur Sharma, who made a comment on Prophet Muhammad in a TV debate.