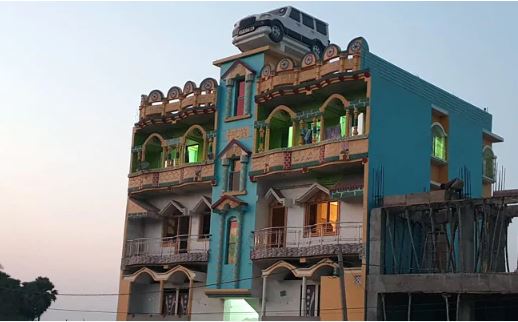 Bhagalpur: Intasar Alam, a man from Bhagalpur of Bihar, has managed to grab Anand Mahindra’s attention. The Bhagalpur man has built a rooftop water tank in his house. However, it is no ordinary water tank but in the shape of Mahindra Scorpio, a vehicle by the Mahindra Group.

Chairman, Mahindra Group, Anand Mahindra showed appreciation and praise for the devotion Alam had for his first car.

Anand Mahindra took to his Twitter handle on October 29 to appreciate Alam. He wrote, “Now that’s what I call a Rise story… Scorpio Rising to the Rooftop. Smiling face with smiling eyes My salaams & appreciation to the owner. We salute his affection for his first car!

Now that’s what I call a Rise story… Scorpio Rising to the Rooftop. 😊 My salaams & appreciation to the owner. We salute his affection for his first car! https://t.co/8hwT7bakWA

According to reports, Mahindra Scorpio was the first car bought by Alam. By now he has bought other vehicles too but as an acknowledgment or honour to his first vehicle, he wanted to construct the water tank of his house in the shape of the Scorpio.

Anand Mahindra To Gift SUVs To Six Indian Cricketers For…