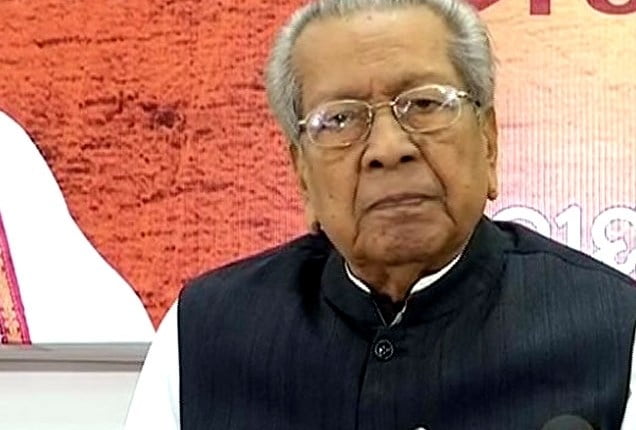 Hyderabad: Governor of Andhra Pradesh Biswa Bhusan Harichandan was airlifted to Hyderabad from Vijayawada on Wednesday morning after he fell ill the previous night.

According to a bulletin issued by Raj Bhavan, 87-year-old Harichandan has been diagnosed with COVID-19 and admitted to the intensive care unit (ICU) of AIG Hospital at Ganchibowli here. His condition is stated to be serious.

The Governor was suffering from cough and cold over the last couple of days following a recent trip to New Delhi. He complained of uneasiness and was flown to Hyderabad on a special aircraft from Gannavaram airport. His wife Suprava Harichandan and son Prithvi Raj Harichandan accompanied him, a Raj Bhavan official in Vijayawada was quoted as saying by HT.
A veteran BJP leader from Odisha, he had assumed charge as the 23rd Governor of Andhra Pradesh on July 24, 2019.

He had won the Chilika Assembly seat as a BJP member in 1977 and represented the constituency again in 1990 on a Janata Dal ticket. He returned to BJP in 1996 and was elected for the third time from the Bhubaneswar Central seat in the by-elections in 1997. He continued to be a member of the same constituency three times in a row.

He was also a cabinet minister in the BJD-BJP led coalition government in 2004.