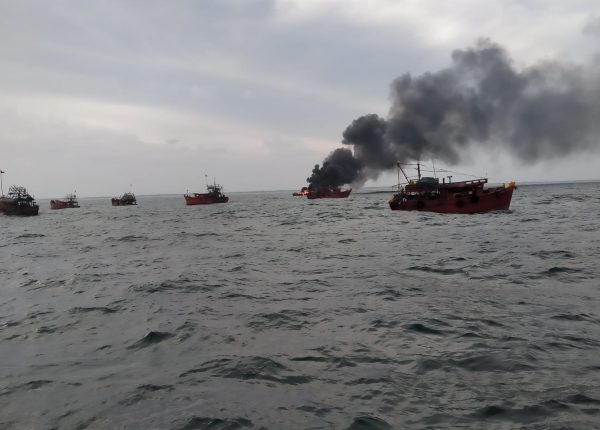 Paradip: Another fishing boat caught fire in the sea off Paradip coast in Odisha’s Jagatsinghpur district on Sunday. There was no casualty.

According to sources, 8 fishermen from the Port Town had gone in the mechanised boat, Bhagirathi-3, to deep sea for fishing on Saturday. While returning with the catch, the boat caught fire amid thick plume of smoke, just before it could reach the coast.

The fishermen of another boat, Mukti Mandap’, which was sailing along with Bhagirathi-3, managed to rescue all persons from the fire. But the boat was gutted in the sea. Though exact cause of the fire has not been ascertained, it is suspected that it may have spread from electrical spark in the engine.

It may be noted that another boat, Sri Laxminarayan, also caught fire in the sea on Saturday. The silencer of the boat reportedly burst, sparking the fire that engulfed the entire boat. However, all 8 fishermen were rescued from the boat in time.